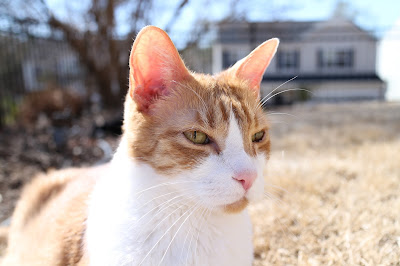 Many of you saw this news on Facebook, but Tanner passed away on Friday evening.

He had been at the vet since Thursday around noon receiving IV fluids and a different antibiotic.  We hoped that if he were to get re-hydrated that he would be interested in eating.  Unfortunately this didn't happen.  He still seemed relatively perky but for him to continue to not eat was a concern.

We discussed a feeding tube, but didn't think that was the best option for Tanner.  He has been through enough and seemed to be saying he was ready to go.  His joy was gone, food and playing.  He was alert but just sitting there.  The vet believes strongly that his cancer had returned, and the best thing for him was euthanasia.

I went to the vet, with Auntie, around 5:20 to spend some time with him before his vet arrived at 6.  He was out of town at another location that day and was traveling back.  He ended up stuck in traffic and horrible rain storms, and wasn't going to be back until closer to 7pm.  We decided to let the vet on duty do it and it was all very peaceful.

We were able to snuggle with Tanner while we waited and he was purring up a storm for us.  He didn't seem uncomfortable, other than still being congested.  I was able to tell him what a good cat he had been and that he could send us someone when the time was right.  I don't know that I'll ever have a cat that is as tolerant as Tanner...he was a special boy!

Tanner is now at the bridge, completing the original Four Crazy Cats.  I'm sure he is eating at the buffet every chance he gets!

I want to thank you all for the purrs and cheers over the years for my boy.  You encouraged him when he was trying to lose weight and then supported him when fighting cancer.  You gave me three extra years with my orange boy, with your thoughts and purrs.  Thank you!

Posted by SuziQCat at 7:57 AM
Labels: Rainbow bridge, Tanner