Smokey and the Vet School 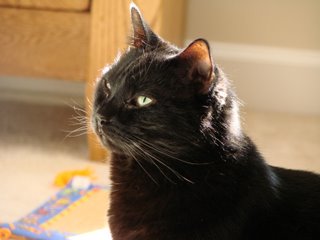 Smokey went in for his appointment with the dermatology department on January 3rd. He was not too happy when I had to grab him and drag him out from under a chair! Once he was in the carrier though, I was able to feed the other cats...Smokey had to fast overnight, so everyone fasted overnight! We got in the car and headed off...Smokey also likes to talk in the car, but he is pretty quite about it. At least he doesn't get the frantic sound in his voice like Tanner does.

We arrived and checked in, and finally were called back, to review the history of Smokey's swollen eyes with them. They are all wonderful at the vet school, and made Smokey feel very comfortable. He acts nervous, but he was actually purring the whole time! Once the Doctor came in she mentioned that she was going to have another department, Opthamology look at him as well, so they were going to keep him for the day. I was able to leave and come back in the afternoon to pick him up.

I came back over and spoke with the doctor. She told me what the treatment plan was, and helped me schedule an appointment for later in the month for another evaluation. We are giving Lysine to every cat in the house, every night. They are loving the canned food treats! Smokey is also taking Terramycin eye drops 4 times a day until we return. He's actually getting them 3 times on days when I'm home a lot, and twice on days that I work. It's been a week now, and his eyes are looking better and he is acting very frisky, so maybe this is helping. Smokey was ready to go home! He is very quiet in the car on the way home...doesn't say a word! 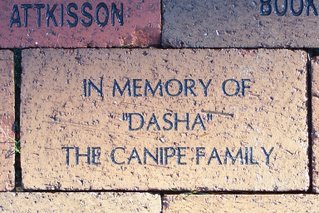 I was able to get a picture of the Brick we dedicated to Dasha while I was there. Smokey was hanging out in the carrier, not being very photogenic. Maybe when I go back, I'll try to get a shot of him.
Posted by SuziQCat at 1:09 PM No comments:

To celebrate the New Year, we had a group of friends over to work on our scrapbooks. We had fun and are all ready for 2007! I went around when the clock struck midnight and tried to find all the cats to see how they were celebrating...they were not very exciting... 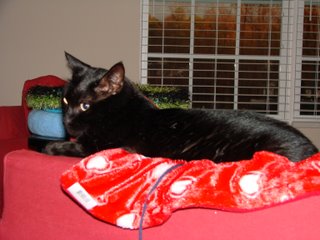 Devon was laying on the back of the couch! 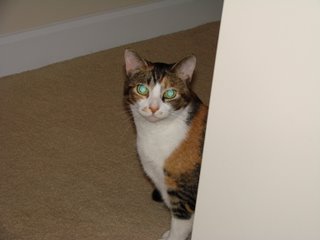 Sophie was trying to get a glimpse of what was happening in the scrapbook room... 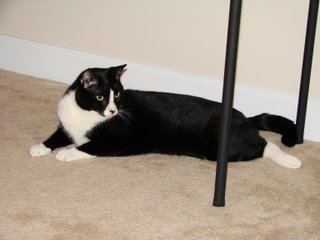 Pirate was laying under a table... 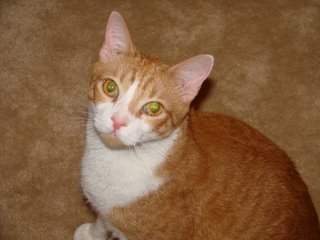 And Tanner was just looking pretty! I couldn't find the others at the time to get their pictures...I think the older boys were sleeping somewhere because it was way past our normal bedtime!

On New Years day, we took down the Christmas Tree...surprisingly enough it still looked about the same as when we put it up. Maybe the boys have grown out of playing with the ornaments so much! I caught a few of them messing around the tree, or stretching up in it, but they didn't knock anything off, so it was fine for them to enjoy it. One last view of the tree before it goes away for another year... 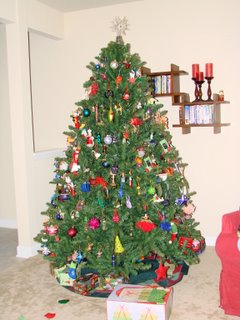 Home for the Holidays

Tanner went home with me to my parents house for Christmas. He is a pretty good travel partner, although he talks a lot...especially when a good song comes on the radio! His favorite artist would be Jimmy Buffett. He'll sit very quietly and listen when I put a cd of his on. So, I try to play him as much as possible when Tanner is in the car. We stopped once for a rest break for us both...I put Tanners leash and harness on him and he sat in the grass for a few minutes. The fresh air helped him to appreciate his carrier and to keep quiet for about 30 minutes. 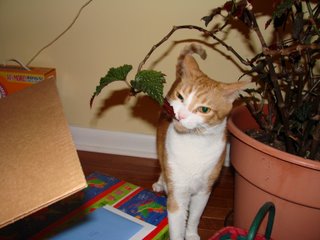 Once we got to mom and dad's house he was much better. He enjoys exploring and eating mom's many plants. We don't keep live plants at our house for this reason...he loves to chew on them and of course they die. We have a couple of artificial trees, and Smokey still eats the leaves like they are real! I told you my cats were crazy.

Tanner would enjoy exploring more if my parents dogs didn't bark at him. He isn't used to that sound and even though he is at least twice their size, he's too nervous to do anything about it. 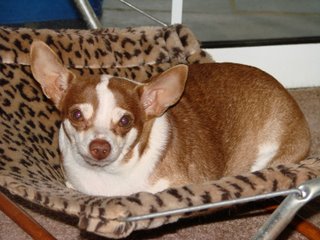 Delilah is the smallest of the dogs...she has some health problems, but still enjoys playing and being held.

Here she is laying in the hammock that we had bought for one of their cats a while back. 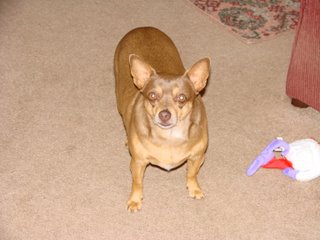 Samson is a bit larger, but still only weighs about 6 or 7 pounds. Tanner could easily show him who is boss, but he just won't stand up to the dogs. Sam loves to play fetch. He is big enough to jump onto the couch, but not the bed. We have gates up so Tanner has some 'safe' areas of the house...the dogs can still look in, but they can't get to him. 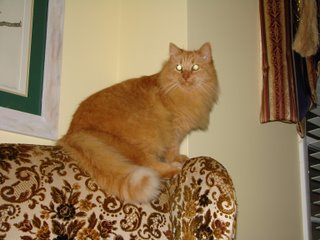 Mom and dad also have a gorgeous long haired orange cat named Chester. He is super sweet and loves to be held and snuggled. He and Tanner like to sit and growl at each other, but that's about it. I'm not sure how old Chester is, he was just dropped off at the house one day when he was a baby. My parents get a lot of animals that way, since they live in a rural area.

After a few days here, Tanner and I headed back to our house. He did pretty good, but demanded I change his towel...guess it wasn't fluffy enough for him. I put two in the carrier for him, and he slept soundly for about an hour. I was thankful to be back home!

I'll be posting more pictures on the blog since I now own my very own digital camera! I have the Sony DSX-H5...it is awesome!
Posted by SuziQCat at 11:55 AM No comments:
Newer Posts Older Posts Home
Subscribe to: Posts (Atom)