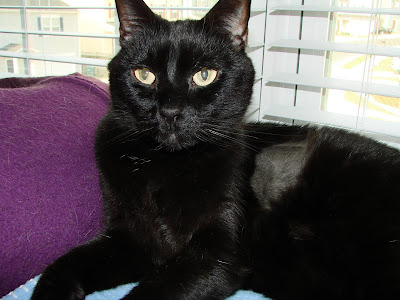 Happy 11th Birthday Goose...I know this is a bit late, his birthday was April 14th, but I did want to write something about him. Smokey is the first cat that I got as an adult. It seems like fate that brought me to him. In 1996, I was about to graduate from college. My sister and I were going to move into an apartment together, and we were both going to get a kitten. It was exciting times! We both started out wanting boys, simply because their surgery would be cheaper. Color didn't really matter, just a nice personality. A friend in our parents hometown had a cat that had just given birth, and we could come and pick from her litter. We drove home, and there were two adorable long haired girls that were just perfect! So much for our cheaper surgery theory! So we took pictures, and started thinking about names, and buying toys and beds and all kinds of neat things for them. We were ready. Our parents went and picked them up on a Friday night, because they were coming down to help us move on Saturday, and they would bring the kittens with them. They arrived, and we got all the moving done, and played with the kittens, and I noticed my kitten, Tigger (she was a brown tabby) wasn't standing well, and didn't act like she felt good. I showed mom and we decided to take her to the emergency vet because it just didn't look right. It took a while to find one, but we finally arrived and the took her back to be examined, and she died while she was back there. I had only known her for a few hours, but I was heart-broken. I hated that she had made the long journey to my place when she wasn't feeling good. It was either a virus, or a vaccine reaction, so we had to keep an eye on Dasha in case it was contagious.

On Sunday, I graduated from UNC-Chapel Hill, but didn't have a new kitten to go home to. My sister picked up a paper for me, and I started looking in the classifieds for kittens. There were quite a few to choose from, so I started calling around. My friend and I went visiting kittens the next day, and most of the ones we found were no longer little kittens at all! It was disappointing. I called another lady that night, and she said she had 2 kittens left, but had 3 people coming out to visit, to not come by, but call the next day and see if she had any left. I called the next morning and she still had 2 kittens! After work, my sister and I drove down to look at the kittens, and I was hoping they would be small enough to fit in with Dasha. There was a little white kitten, and a small greyish black one with some stripes on it. They were living on a screened porch with a bunch of adult cats that kept growling at them. I felt bad having to choose, but I chose the one with the stripes because he was the smallest of the two. He could fit in my hand, and he laid in my hand the whole way home and slept. I chose the name Smokey because he had black and grey and white on him...the colors of smoke. 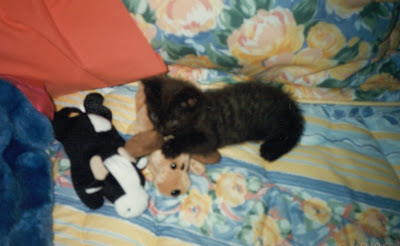 Smokey as a baby. He was about the size of a Beanie Baby!

Smokey was a nervous kitten, but he loved to play and jump! He and Dasha became instant friends. They played together a lot.

It was fun at night just to watch Smokey and Dasha. They were very entertaining!

As Smokey grew he loved to lay in a comfy spot with his stuffed animals. He was still a nervous boy, but had started laying on me, if I laid on the bed to read. He had multiple favorite spots around the house, one being a towel on the bathroom counter! If we had guests over, they rarely saw Smokey. His safe zone was my bedroom, under the bed, or in the closet. He loves a closet!

Smokey's bad habits would include opening my dresser drawers and pulling clothes out! He loves my pajama drawer, which is the bottom one. He can open the bottom two drawers. The best time to do this is of course in the middle of the night!

Another bad habit when we lived at the apartment, was trying to open the bathroom cabinets, but not succeeding and letting them slam closed again. This too was most fun during the night. I got smart though, and started leaving a hand towel wrapped around the post in between the two doors! He could play all he wanted, but it didn't make noise.

Smokey was my only boy until Devon came to live with us in 2001. Smokey was 5 at the time, and I think having those 5 years alone with him has helped him to thrive. He is now a very trusting boy. He loves to lay on my lap, regardless of where I am in the house. He still loves to lay on the towel on the bathroom counter, and a comfy blanket on the bed. He is spoiled, but he's my boy!

I still hate that Tigger died, but I'm glad that I was able to find Smokey and give him a life that he deserves. Happy Birthday again Smokey...you're my special Goose! 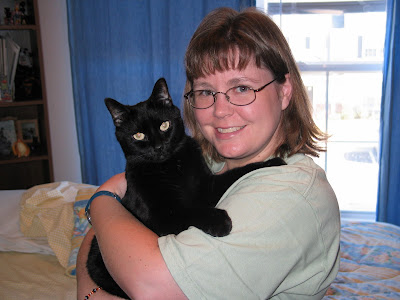 Posted by SuziQCat at 9:36 AM No comments:
Newer Posts Older Posts Home
Subscribe to: Posts (Atom)