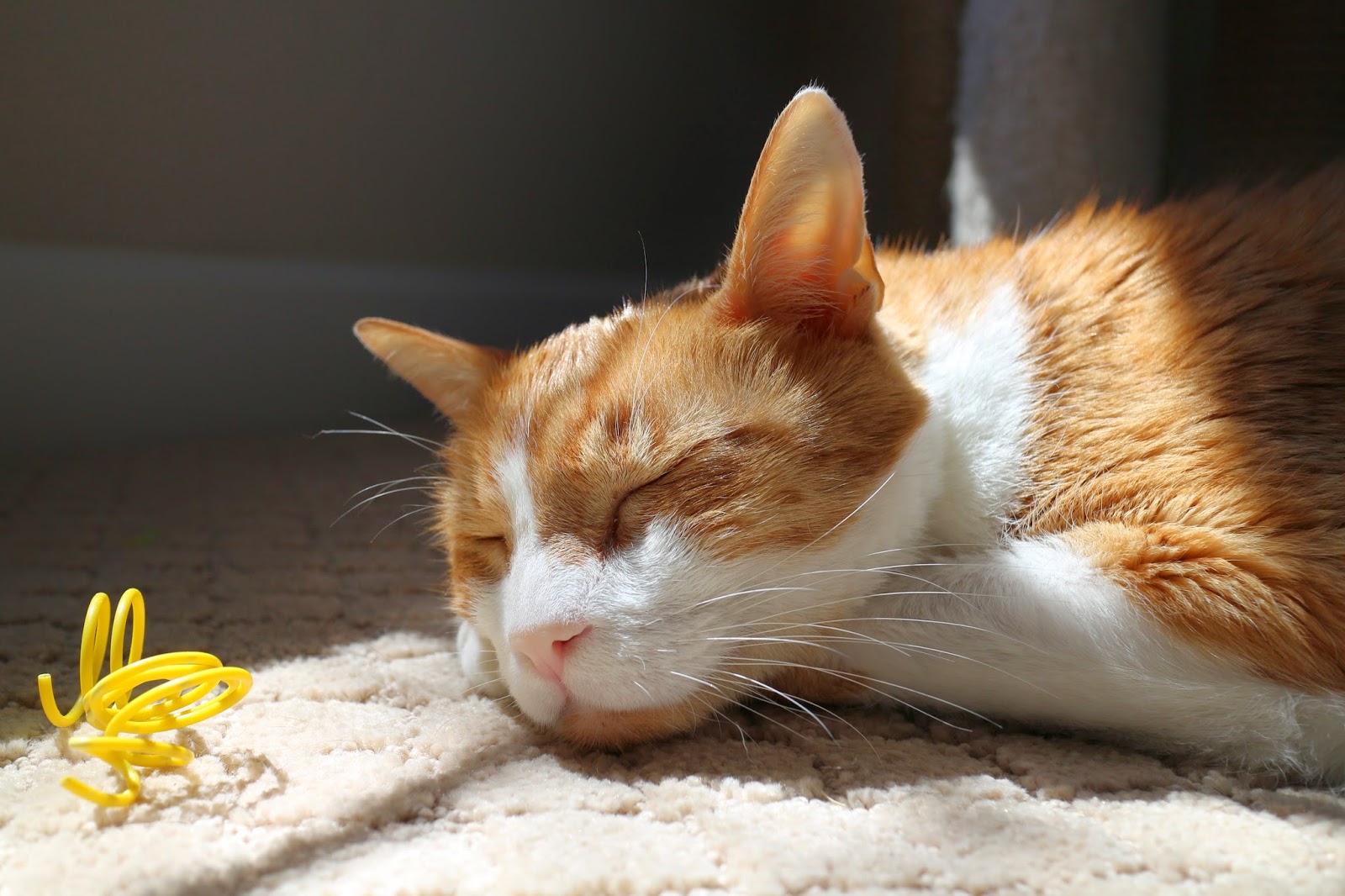 Tanner is eating well, and actually gained a couple of more ounces this week.  He is at 15 lbs 6oz.  This is fine with me at the moment.
He is looking better and acting better and eating better than before.  I've decided to hold off on the ultrasound.  I'll take him back to the vet in May to check his red cell count then, and if still low, will discuss having the ultrasound done.  If improving then I'll do nothing more than wait.  This seems to be in line with what I am seeing, and if I didn't know he was anemic, I would not suspect anything was wrong with him, based on outward appearances, appetite, and activity level.

Posted by SuziQCat at 8:59 AM 7 comments:
Labels: Tanner, Weight Loss

Ollie is now 7 months old!  He is growing into a fine looking Mancat! 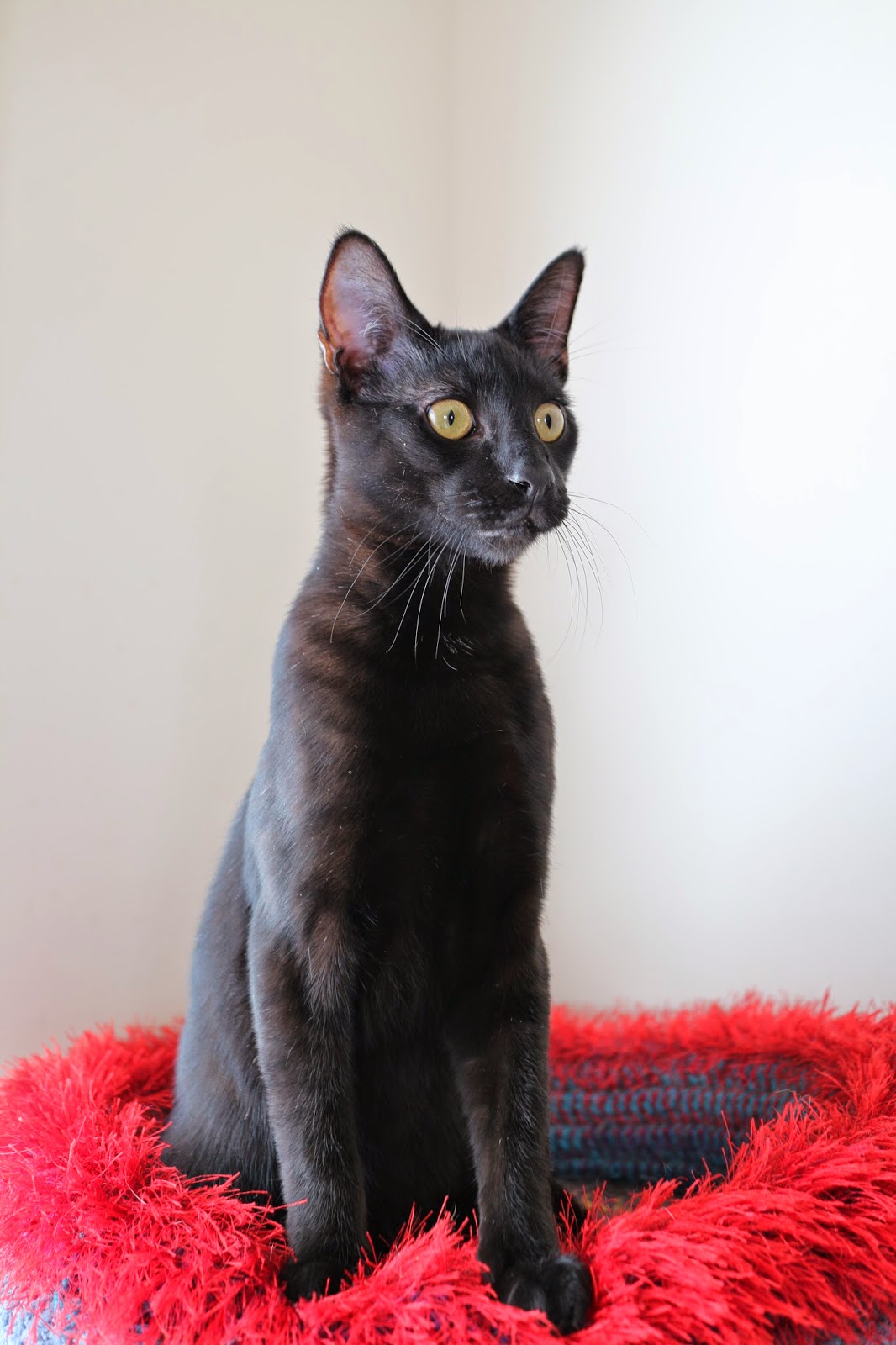 This photo was taken in early April.  He is quite handsome!
Ollie weighs 9.5 pounds now.  He is starting to fill out a bit and doesn't look so skinny when you look down on him.  He isn't fat, but is solid.  He and Georgie are switching to adult food now, since they are such big boys! 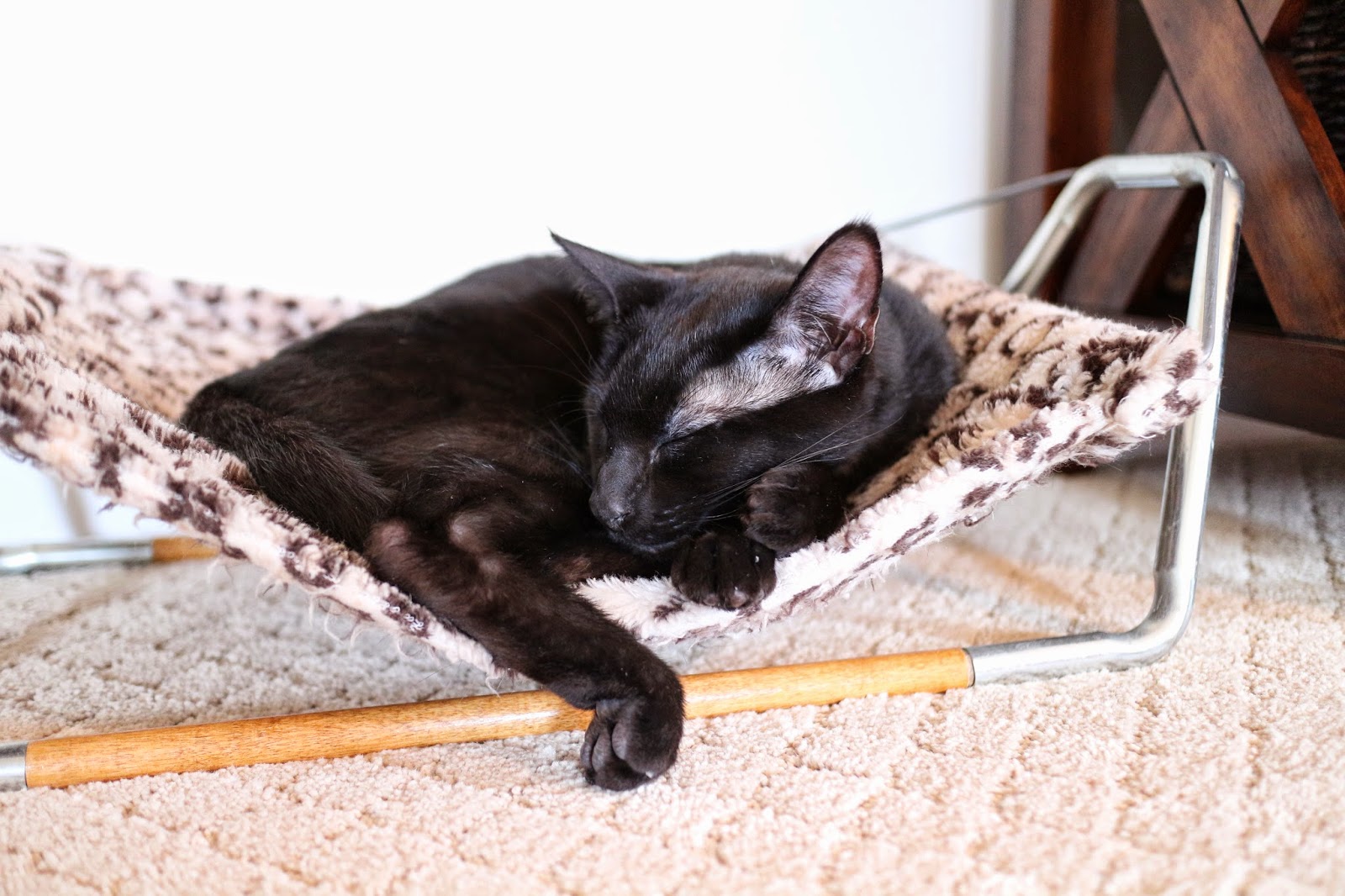 Ollie will sleep in this hammock in the evenings after meals.  I love how he curls his back toes!  He does this when you hold him too.  This will sound a little crazy, but I love how his feet smell.  Have you ever smelled your cats feet?  Now, not when they've just come out of the box, but when they've been sleeping with them tucked up underneath their bodies.  Go give it a try!
Ollie nurses on your hands still, and loves to squeeze in as close as possible in the night.  He wants both of your arms around him, and he will lay in the circle they make.  This is rather difficult when you are laying down, I might add!  Oh the random, uncomfortable positions we get in to please the cats!
His favorite toys are:
*Puff balls with some crinkle stuff in them
*a blue puff ball
*jelly beans from casbah kitten
*the toy and refill from Japan
*Georgie and Tanner
Well, that's an update on Oliver Hughes!  He is a love and I'm so happy to have him.

Posted by SuziQCat at 12:12 PM 7 comments:
Labels: All about Ollie, Oliver Hughes, Ollie

Tanner lost a bit of weight two weeks ago, and then gained a little bit back this past week, bringing his weight to 15 lbs 3 ounces.  We are trying not to lose any at the moment, as he is losing muscle more than fat right now, and we are still trying to make sure he is healthy and rebuilding his red cells.  He looks much better than he did a couple of weeks ago, but I am still debating about having an ultrasound done, for peace of mind!  It seems like since he came down with that terrible cold at the end of January, he hasn't been the same...he is having a hard time bouncing back completely. 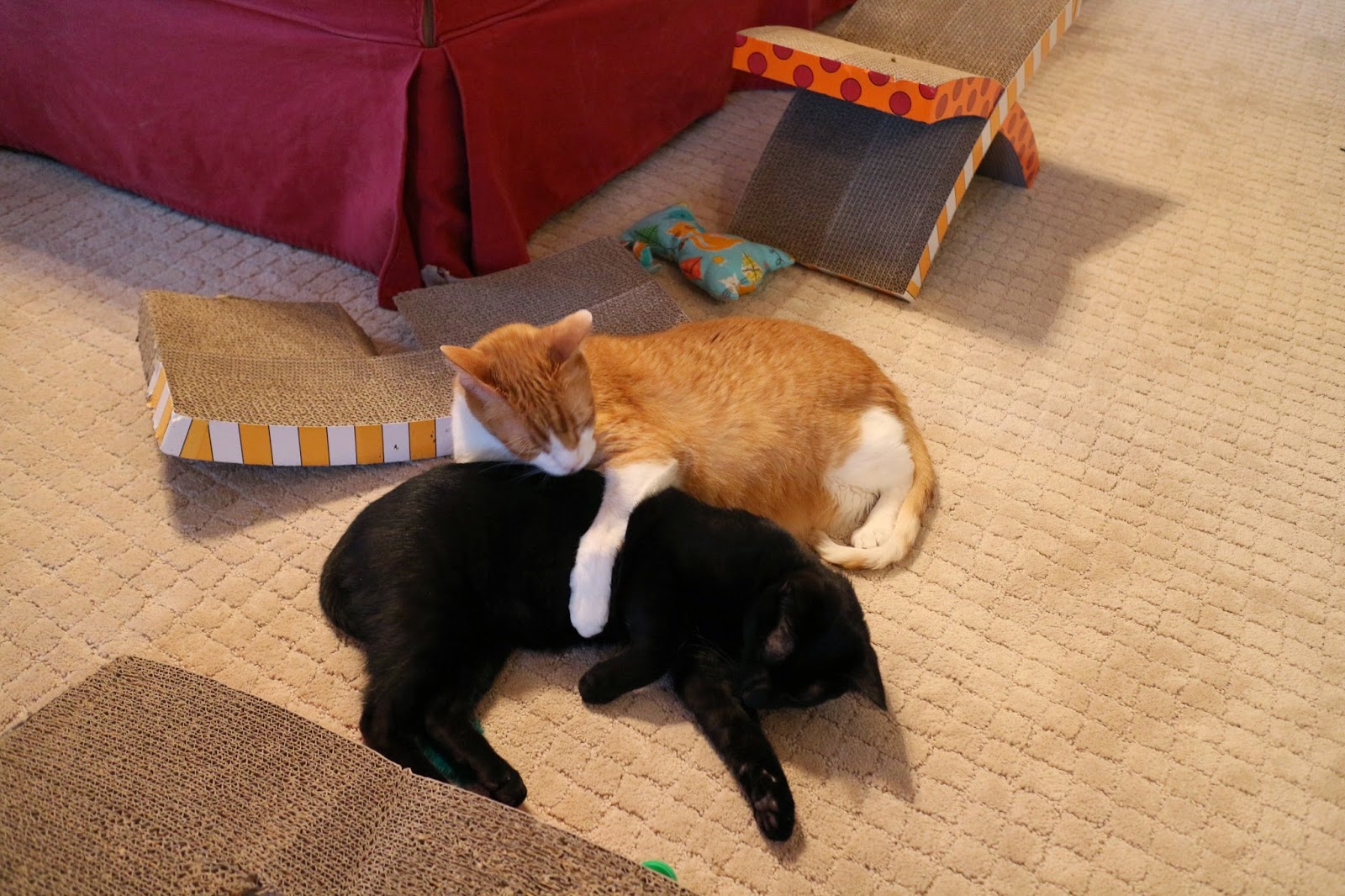 Tanner still loves his baby though, even though his baby is HUGE!  Ollie has grown so fast it is hard to remember him as a tiny baby now.  Ollie is all muscle too, he is a solid cat! Ollie weighs 9lbs...he is only 7 months old! 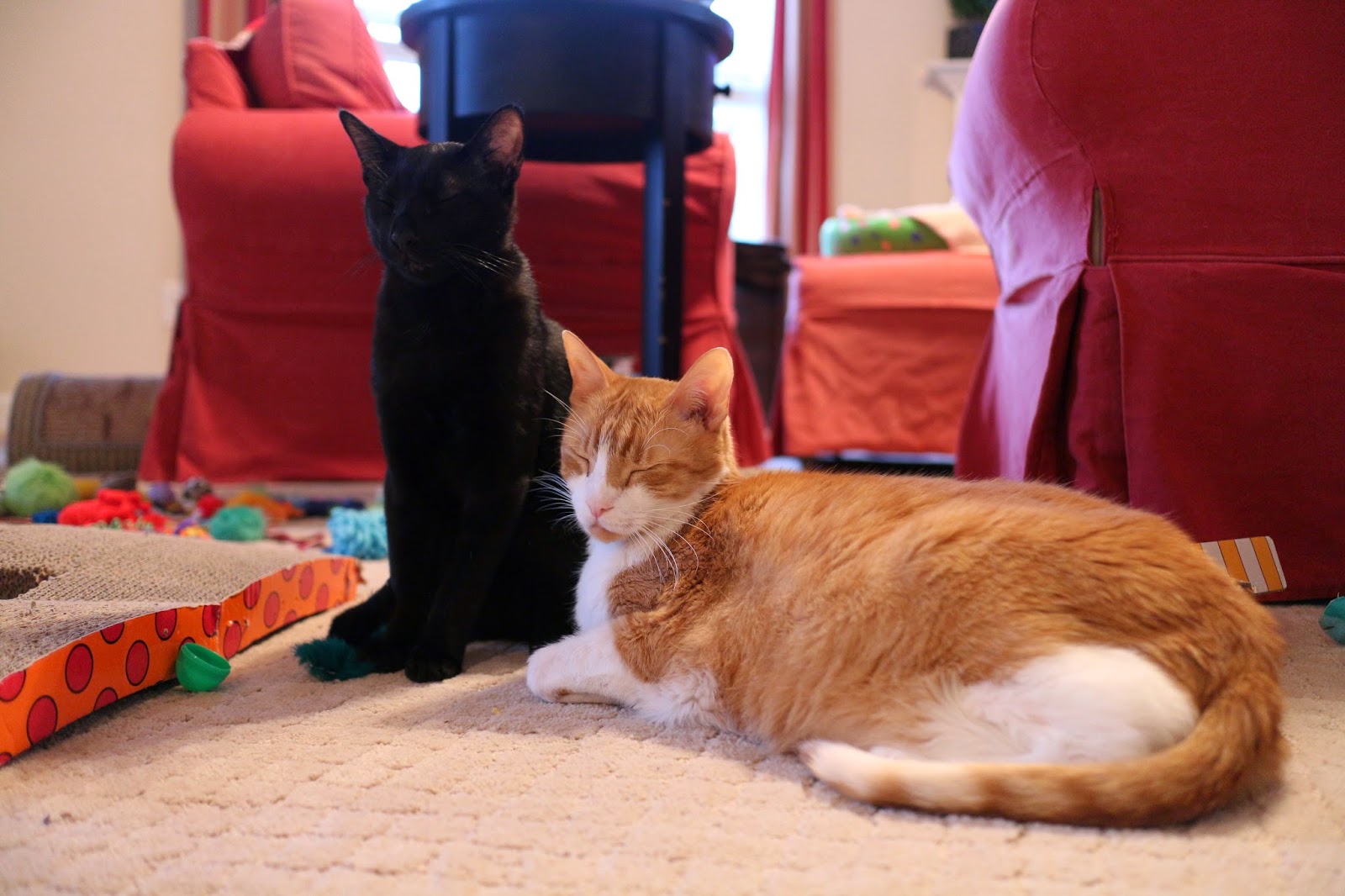 I find Ollie sitting like this a lot...yes, he is sleeping!  If you watch him closely, he is swaying back and forth a bit...I usually go and help him lay down or snuggle with him!  He is one crazy kitten.  I am so glad that Tanner and Ollie still get along so well.  Tanner loves to wash his baby, and they will wrestle some.  Tan is learning that he doesn't have to be quite as gentle with his baby now! 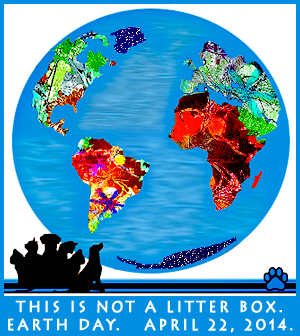 A simple post today with a simple message...take care of the earth...it's the only one we have!
Comments are off today. 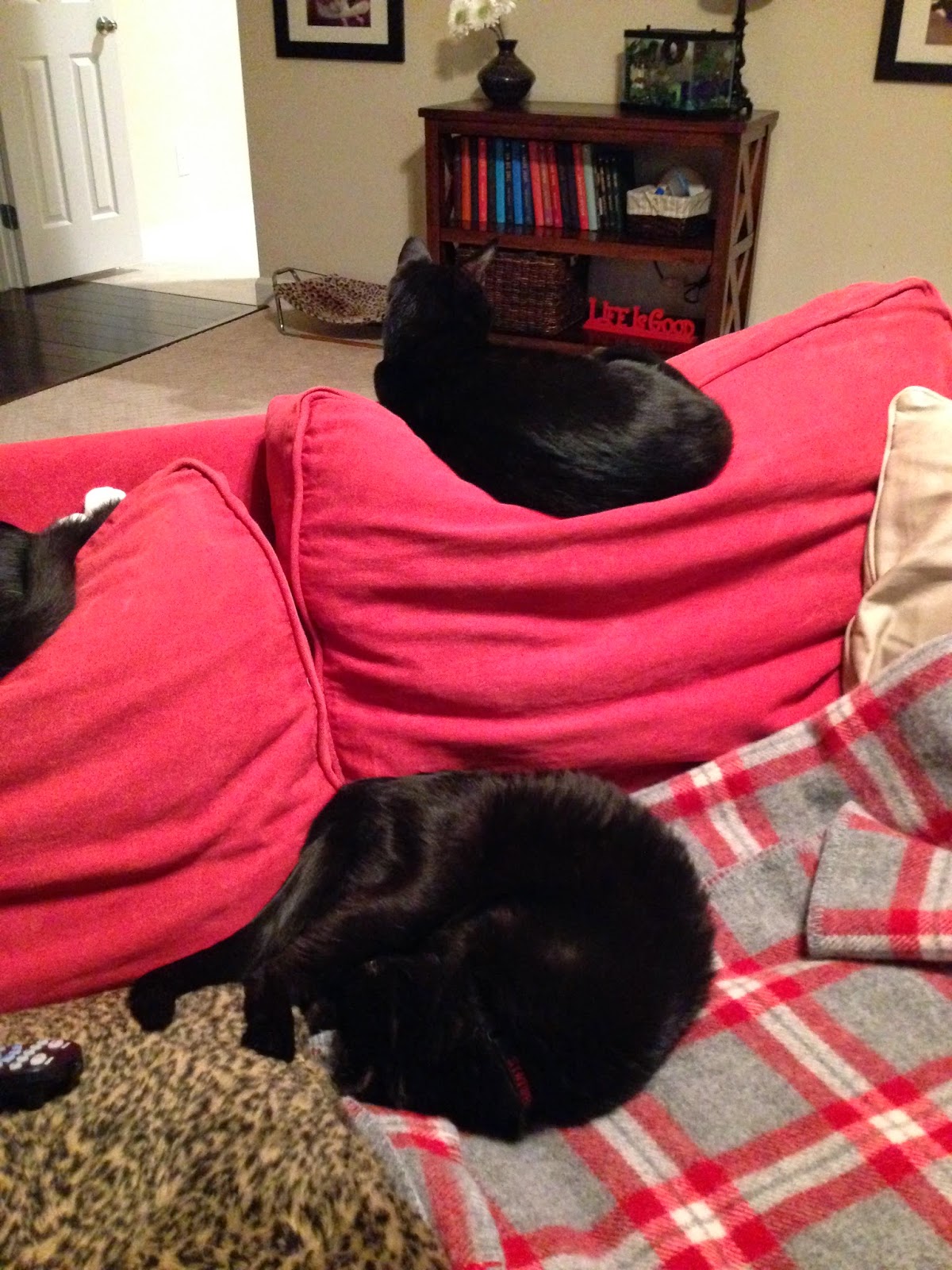 Smokey(on blanket) and Ollie (back of cushion) are wiped out after a big Easter weekend.
Ollie now weighs more than Smokey!  Smokey is still working hard to gain weight or at least maintain.  He has lost a couple of ounces of the last two weeks...so we will cater to him more.  Has anyone found a food that has worked well for your cats to help keep weight on? 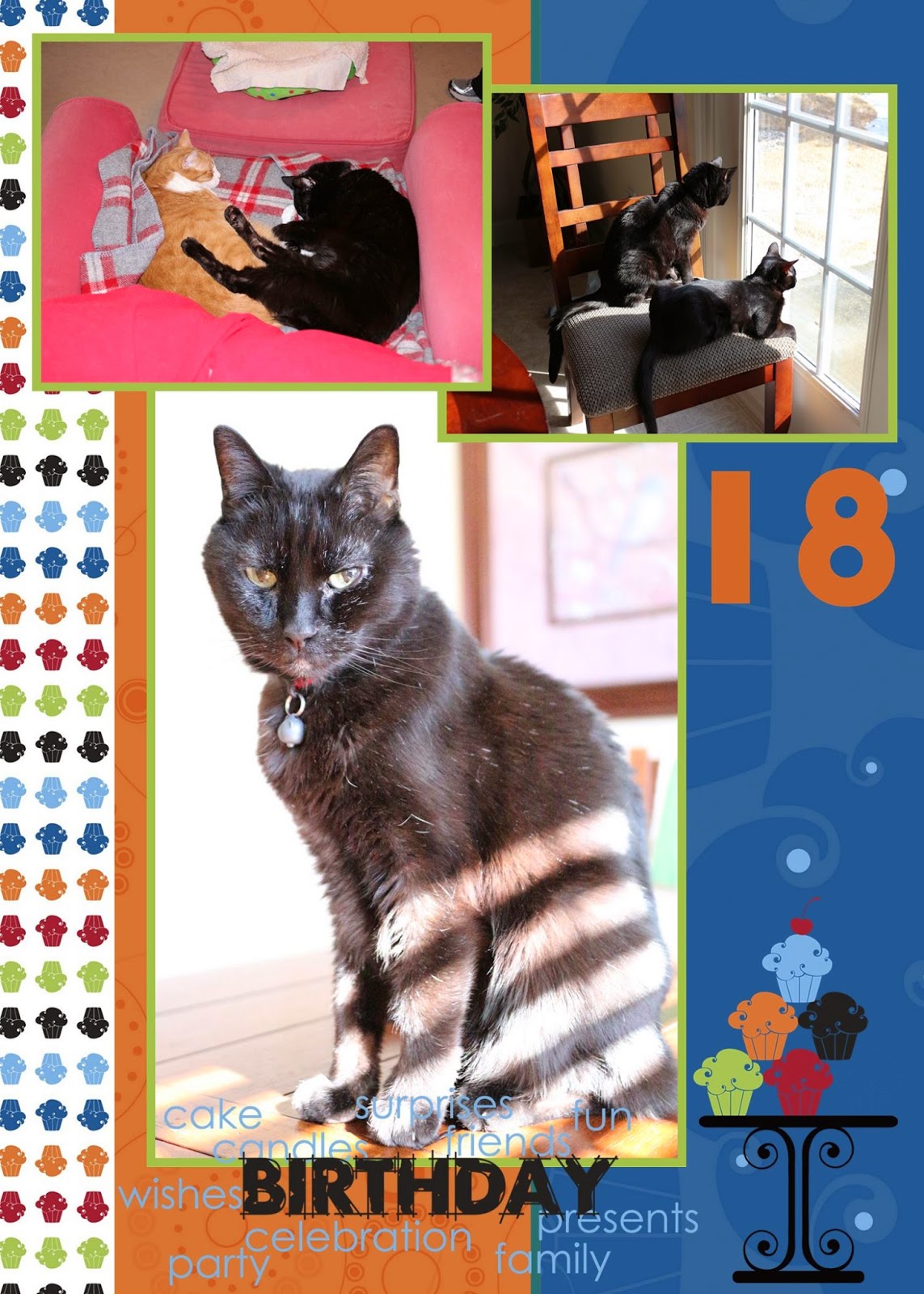 Happy Birthday to my sweet boy Smokey.  I can't believe I've had you for 18 years now!  We've moved 4 times, seen many foster kittens come and go, lost two brothers, and shared more snuggles that I can count!  It took you 5 years to sit with me on the couch, but you haven't looked back.  You show more personality every year, and I am so blessed to have you in my life.  I am so thankful I chose you all those years ago!  Happy Birthday Smokey...here's to many more years!
Posted by SuziQCat at 6:30 AM 23 comments:
Labels: Happy Birthday, Smokey 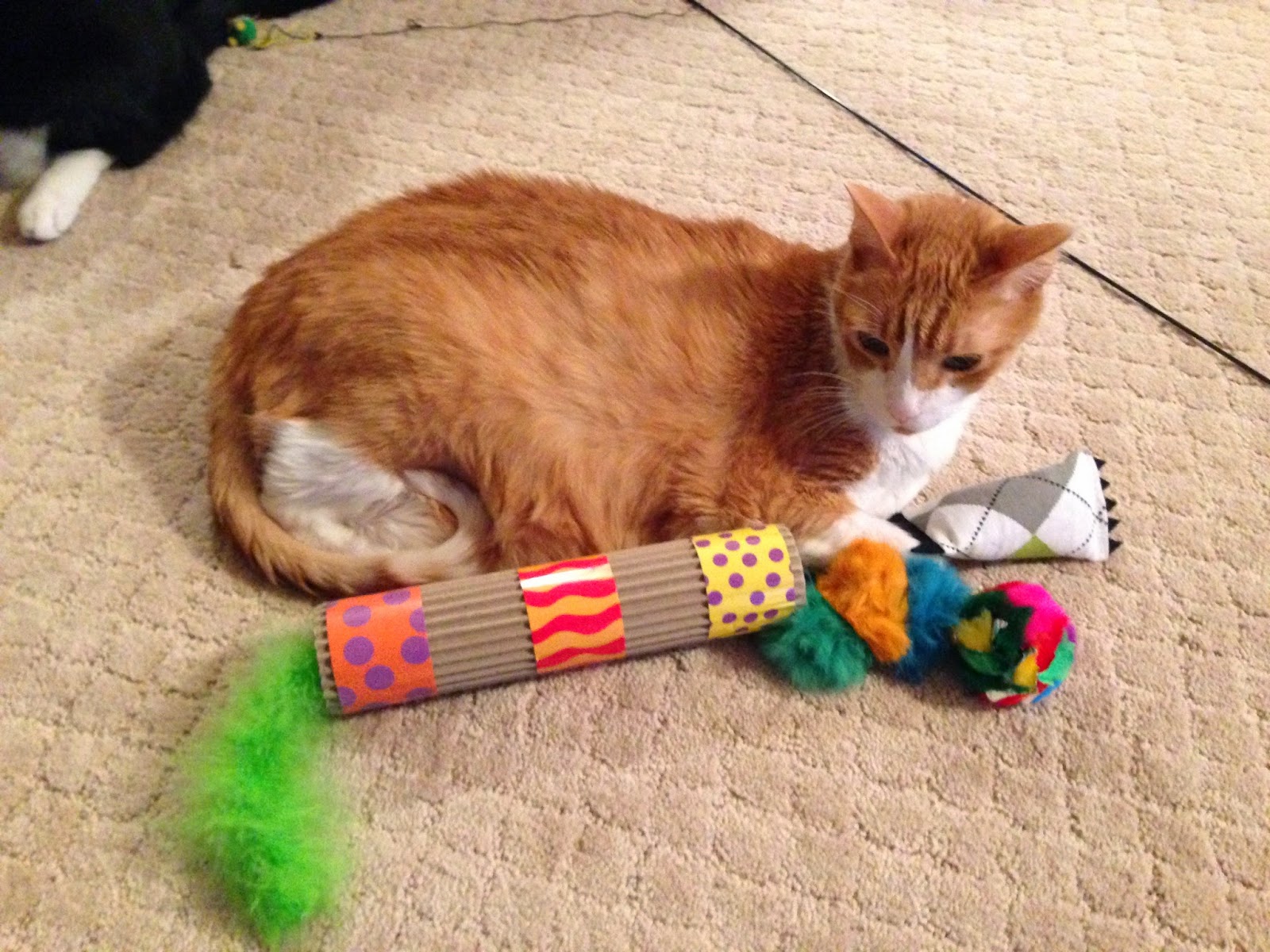 Tanner had a nice birthday yesterday...he got many new toys.  He even scored a new X Scratcher, but he didn't sit on it, so I don't have a photo yet. 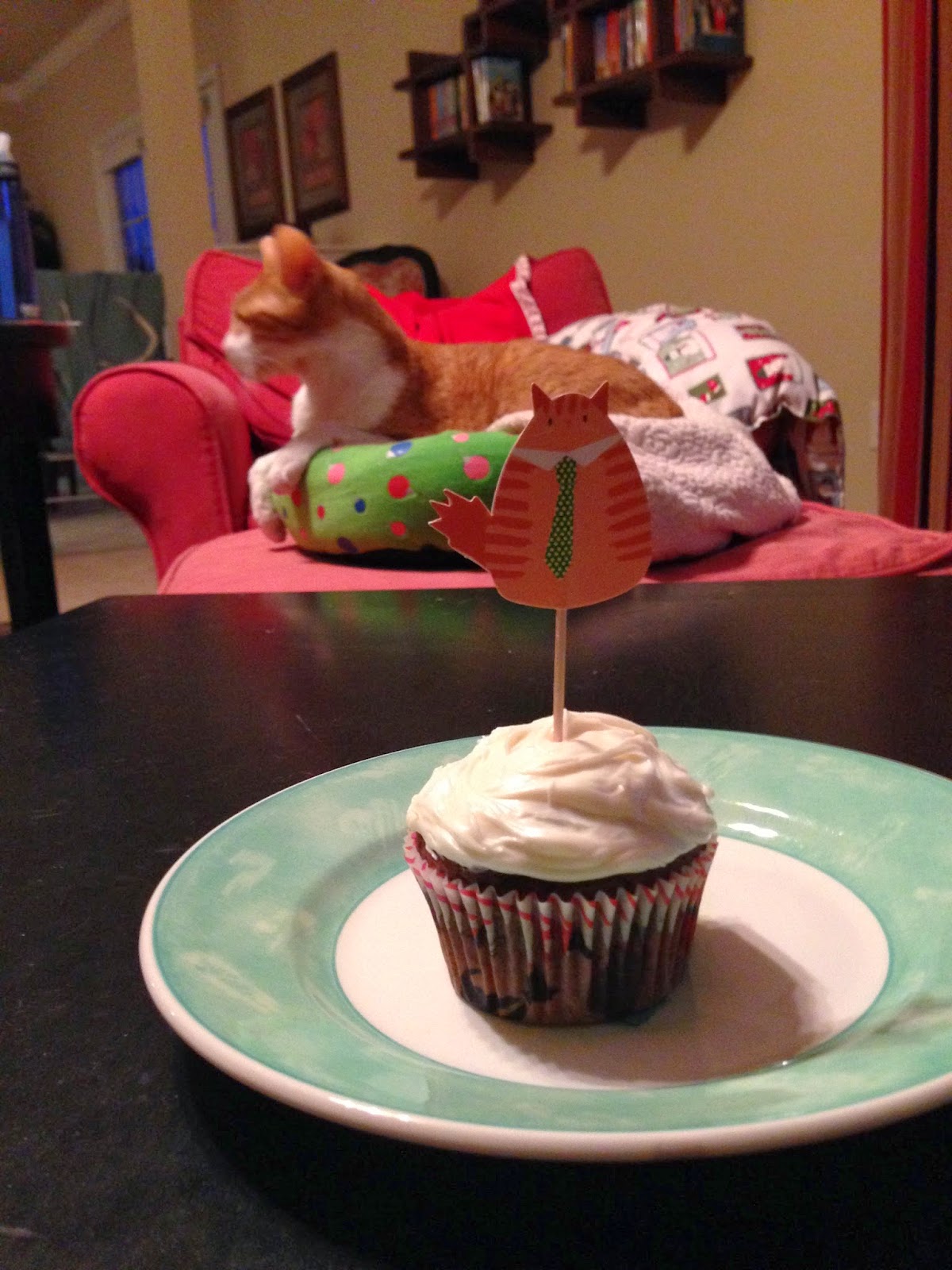 Auntie made him cupcakes because this boy has a sweet tooth like nothing I have ever seen.  Auntie knew this would make him feel better! 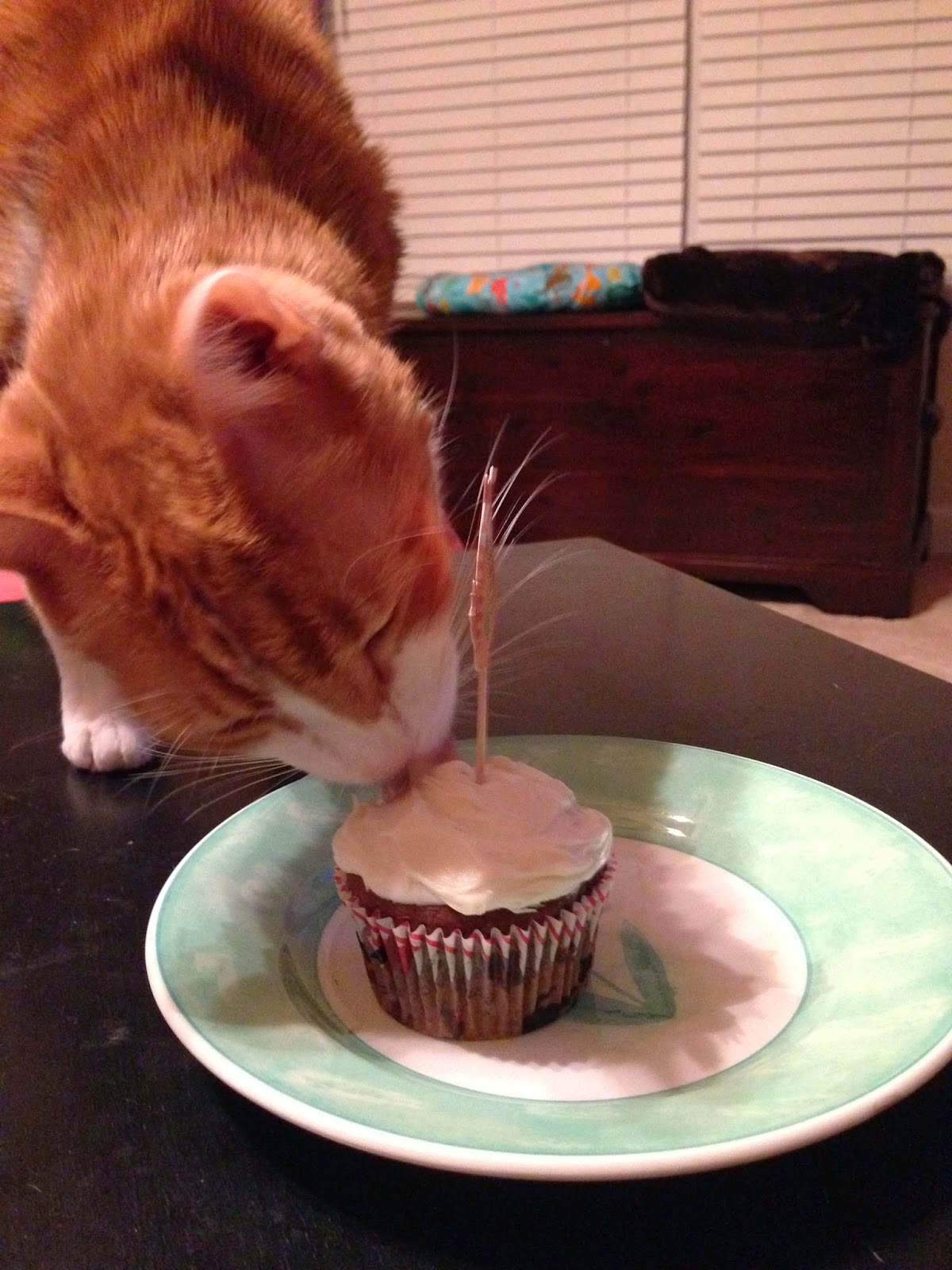 Tanner enjoyed a quick lick of icing and a couple of small bites of cake...he was a happy boy!
Today at the vet, she checked noted that he didn't look quite right either, and decided to do a few things to check...
Blood pressure - normal
Tempurate - normal
Eyes- she thought he looked "stoned"
CBC - still only 28% red blood cells, but has an increase in the reticulocyte value, which means he is making red cells!
She gave us an iron supplement to help his body along, and instructions to watch him.  If he still seems "off" in a couple of weeks to a month, then she will ultrasound his abdomen and do chest x-rays to see if there is something more.  She felt comfortable waiting, since he appears to be improving ever so slowly on his own.
Tanner was happy to be back home...he got a dose of iron and went to bed :)
Ollie's FeLV/FIV test came back Negative/Negative! 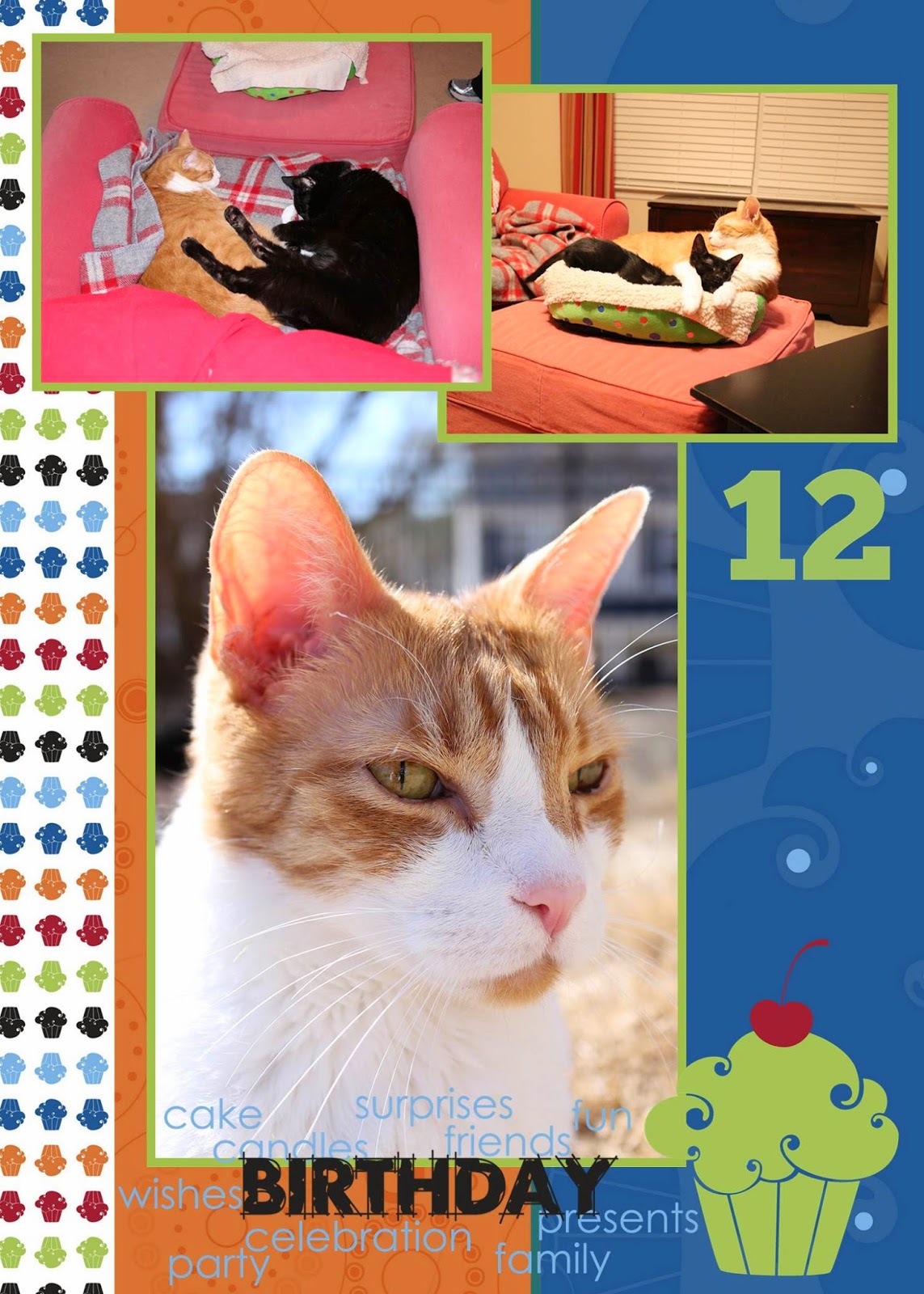 Happy Birthday to my sweet Tanner!  You were the baby in the family for 11 years, and now you are the middle boy.  You've accepted your role as big brother with ease, and I know you love your baby!

I want to keep things positive on his birthday, but I need to ask for some purrs for Tanner.  Last week, he stopped eating for just one day, and didn't look right.  He wasn't moving around a lot and just acted like he felt terrible.  I made an appointment for the next morning and we went to the vet, his regular vet was not there, so we had to see someone new.  He had eaten a touch of breakfast and seemed to be doing a bit better though.  His overall exam was unremarkable, but his blood work showed he is presenting with non-regenerative anemia.  His body is not making red blood cells like it should be.  Right now, we are not sure of the cause, but over the weekend, he still looks terrible, is sleeping a lot, not moving around a ton, and generally acts like he feels bad.  He is eating pretty normally, but not acting right.  Oliver is going tomorrow morning for blood work, and Tanner will be tagging along to see his regular vet.  I've stopped researching online potential causes, and will wait to speak with her.  Some purrs for something simple would be greatly appreciated!
Posted by SuziQCat at 6:30 AM 22 comments:
Labels: Happy Birthday, Tanner
Newer Posts Older Posts Home
Subscribe to: Posts (Atom)