Ollie is doing very well, and the others are all adjusting nicely to him now. 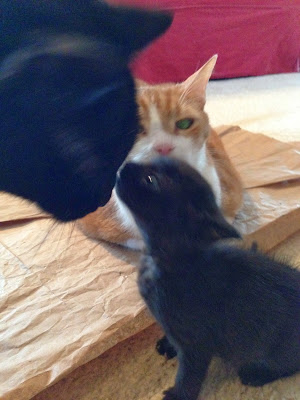 The first group photo, taken a few weeks ago.  Quality isn't that great, but I love that all three of my boys are in the shot! 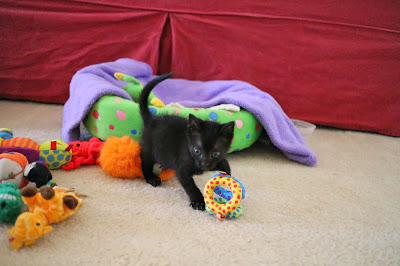 Ollie loves to play!!  He is getting more coordinated each day.  Tanner and Cousin Sophie try to play with him, but he still likes to bite and attack, so Tanner spends a lot of time holding his baby down and teaching him!  Sophie doesn't realize how small he is, and she plays a bit rough, or runs too fast for him still... 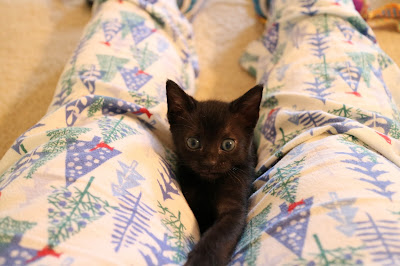 This is the safe spot...when he's had a lesson from the others, he comes for comfort.﻿ 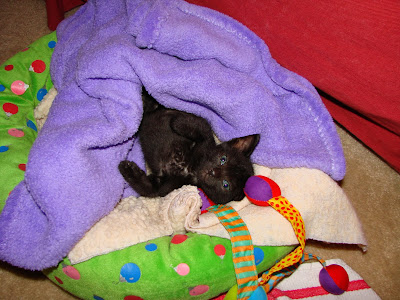 Playing is hard work...he will put himself to bed when he has had enough.  He loved when I put this blanket over him...it was warm from the dryer.  He slept for at least another hour!
Posted by SuziQCat at 8:00 AM 8 comments:
Labels: learning, Ollie, Playing hard, Smokey, Tanner 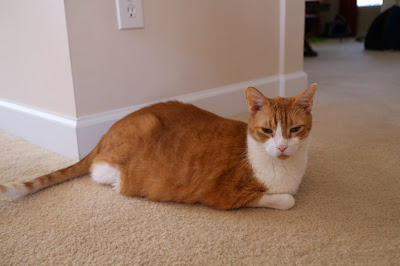 Weight loss this week became a slight gain, but we are all ok with that...We had a gain of 2.5 ounces, bringing our weight to 17 lbs, 7.5 ounces.

I do believe Tanner was getting into the tub and eating Ollie's food.  Ollie has moved into a room of his own, with a baby gate blocking the door, so Tanner no longer has access to his food.

Tanner is playing with Ollie, but still enjoys his special morning playtime, while Ollie is in his room.  Tanner loves to run through his tunnel and jump for a string!  I think we'll see a loss this next week with his weight.

Posted by SuziQCat at 8:29 AM 5 comments:
Labels: Tanner, Weight Loss

Ollie came to live with us on October 7th.  He was about 3 weeks old, and weighed 11 ounces.  Why did we get him so young, you might be asking?  Well, he was found just laying under an apple tree when a couple was out walking.  (I'm thinking mom was transporting and dropped him when she heard people)  This couple took him to the animal shelter, but since he was so young, it was either move him into a home or euthanize him.  Thankfully a friend saw him and took him home.  He stayed at her house from Friday until Monday.  He was not eating well for her as she was not used to bottle feeding.  She asked if I would take him on Monday, and the rest is history. 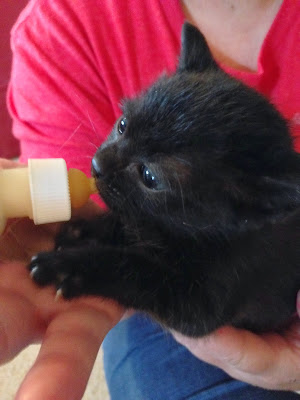 It took a day or so to get him used to the bottle and drinking the amount he needed.  Once we figured out how warm he liked his milk, and which nipple he preferred, there was no turning back for this fella. He gained weight daily and continued to thrive... 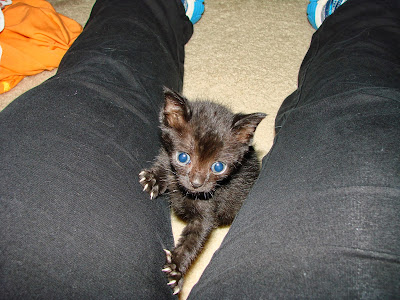 He slept in the bathtub and spent time there when we were not home.  He was nicely contained and safe.  He had a litter box, which he used like a champ!  He also had soft blankets and a heating pad in case he was cool.  From day one, he slept through the night and did not need a feeding until morning. 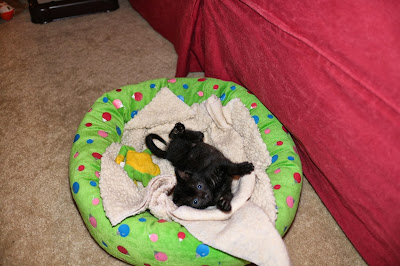 We would bring him down to play as much as possible.  He loves to jump on your legs when you are sitting down, and he adores shoes!  Even now, when he is tired, but not wanting to stop playing, he'll lay on your shoes. 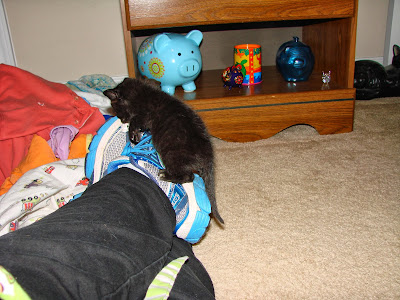 He is now almost 6 weeks old.  His eyes are still bluish, but I'm sure they will change soon enough.  He weighed 1 pound 5 ounces on Sunday.  He no longer takes his bottle.  He gave that up on his own.  He eats softened up hard food, and sometimes regular hard food.  He has a good many teeth.  He plays hard and sleeps hard.  He is still in the tub when we are not home and at night.  He may get to move into a bedroom with a baby gate this weekend.  He is sweet as pie and the boys are adjusting to him now. 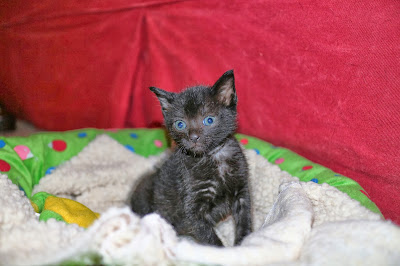 He is precious and I am so happy to have him in my life.  He is Oliver Hughes.

Notes on the name:  Hughes was my grandfathers name, and I had a toy growing up that I called Ollie.  I thought it would be a cute name for a kitten.  We call him, Ollie, Oliver, Little Bit or Jelly bean at the moment.

Medical notes: He has coccidia when he was found, so he was treated for that.  He had round worms, so we have done one round of treatment and will do another this week.  He has not started any vaccines yet...I'd like him to weigh 2 pounds before we start on those, plus he is too young yet.
Posted by SuziQCat at 6:30 AM 13 comments:
Labels: new kitten, Oliver Hughes, Ollie

Today, we have two pictures of Tanner and the new baby...I will post an introduction to him tomorrow! 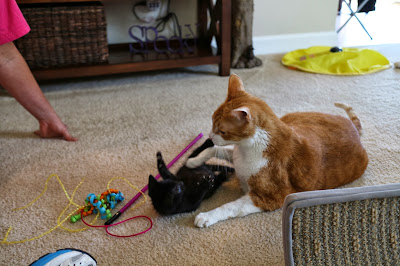 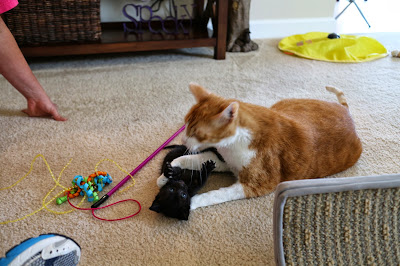 Tanner's weight loss this week was 6 ounces, bringing him down to 17 lbs, 5 ounces.  Tanner really loves the baby and sits and plays with him anytime the baby is out.  He is gentle, but will not hesitate to correct if the baby bites too hard!  I think they will be great friends.
Tanner is eating less these days, and is not acting as hungry!!  I think giving him something to think about besides food has helped him.  Now, we need to make sure he stays away from the kitten's food!﻿
I am very proud of Tanner and his weight loss...he now has a bit of a waist!  A big announcement for Tanner is that he can wash his own bottom again!!!  Woot Woot!
We appreciate all the support we've received on this journey...keep those thin thoughts coming our way!
Posted by SuziQCat at 7:40 AM 5 comments:
Labels: new kitten, Ollie, Tanner, Weight Loss

This photo has a Squee-teaser warning attached to it... 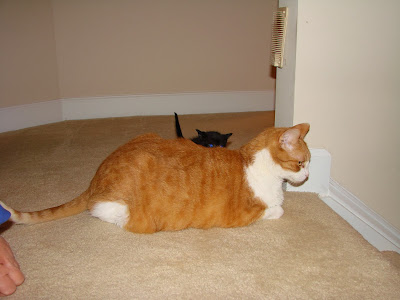 Our goal with him is to be down in the 15 pound range...so at least two more pounds need to be shed.  He is doing so well on his plan and being able to have a bit of extra hard food has made a lot of difference!

I've been doing some work from home for the past week (see photo reason above) and being able to spread his meals/snacks out over the day really help him to stay full.

Thank you all again for your thin thoughts...please keep them coming, we are half-way to our goal.

More photos on the little bit above to come shortly...I will say, he is precious, but not everyone in the house thinks so :) 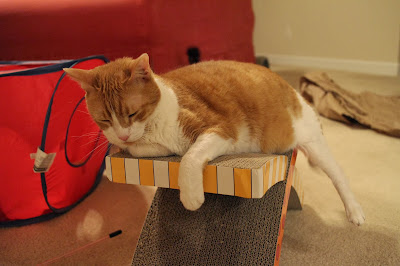 Tanner's weight stayed the same this week at 17lbs 15.5 ounces.  We are ok with this...it is better than gaining!

I took Tanner to the vet last week to have his bald spots checked out...she seems to think it might be some sort of allergy, but to what is unknown.  We are putting some ointment on the spots twice a day, and they are all but clear now.  I have not found any new spots either!    She did culture for the dreaded ringworm, but I am pretty sure it is not that.  We have had it before and this did not look like it.

She was very pleased with his weight loss and said we can try to slow it down a touch, especially since he is acting so hungry.  We can add an extra 1/8 cup of dry when he acts starved.  It is not a daily thing with us, but it is nice knowing that if he seems hungry, we can offer something extra.

We were out of town this past weekend and had the pet sitter offer the extra dry each day, so I think that could be why the loss stopped this week.  We'll see how it goes next week.

In a couple of weeks, we will have a big (or rather tiny) announcement to make...stay tuned!
Posted by SuziQCat at 1:51 PM 7 comments:
Labels: Tanner, Weight Loss

Tanner would like to thank everyone for suggesting fresh catnip for his present...he loved it! 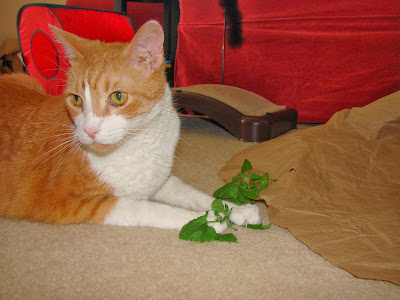 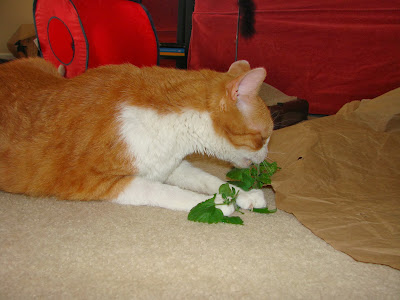 Weight loss update - this week we went down 1/2 ounce...a small loss, but a loss none-the-less.  He had such a large jump last week I am not surprised by a slower week.  His weight is now 17lbs, 15 ounces.

He has an appointment to see his vet tomorrow.  The bald spots are improving, but still there, so for peace of mind, I'd like to have him looked over.  Plus, she will be so pleased with his progress!
Posted by SuziQCat at 6:30 AM 7 comments:
Labels: Tanner, Weight Loss
Newer Posts Older Posts Home
Subscribe to: Posts (Atom)