Mojo has always been the most challenging of my boys as far as medical issues. He started off sick and thin when we got him. We've worked through lots of different treatment regimes with him, and he has drastically improved in the two years we've had him. We brought him home from the facility in February 2005. April he had his teeth cleaned, and was referred to the vet school for an ear polyp. In May he had ear surgery to remove the polyp. The sore on his face remained, so we worked for 7 more months to get that cleared. We did a food trial, eating only Venison and Green Pea food. He was also on a multitude of medicines, raning from the simple, like a Pepcid for indigestion, to immune-suppressants for severe allergy problems. He was also on steriods and antihistamines. Finally in December he was clear and able to be tested for allergies. He is allergic to EVERYTHING! In January 2006, we started the immunotherapy, or allergy shots. He responded beautifully, and has been off all medicines, with the exception of an antihistamine every now and then for over a year!

Fast forward to April 2007. Mojo is doing great...we're still giving the allergy shots every two weeks, and he handles them like a real trooper. He can eat anything that he wants. He weighs close to 10.5 pounds. Life is good for Mojo. Overnight his world changes. A HUGE abcess pops up on his chin. He goes to the vet school for an emergency check-up, where more biopsies are taken. He is sent home on antibiotics for a monthand pain meds for a week. Mojo does not tolerate antibiotics well. He became quite sick again, lost a good bit of weight and just felt miserable. We treated the nausea with Pepcid and this would work for a couple of days, then we just had to increase the dose. We made it through and Mojo went in to see the dentist and his favorite dermatologist to see what the problem was, and to try and figure out what caused the abcess. Mojo spends the day there and gets lots of x-rays. It is decided that his teeth need to come out because they are rotten and decaying. After about 4 hours of surgery Mojo is able to come home with three canine teeth only! He is on pain meds, and you guessed it, more antibiotics! He started out sick from the anesthesia, then sick from the antibiotics, then sick from the pain meds. We had to resort to giving fluids and an injectable form of pepcid to help him through. Slowly he started feeling better and eating better and looking better.
We saw a small sore on him arm after surgery, but figured it was just from the IV. Well, Mojo kept messing with it, and washing it, and chewing at it, so it became a huge sore on his arm! I took him in to be seen, and yep, he was given more antibiotics, and some ointment for his arm. After two doses of the antibiotic he was sick as a dog again. We stopped them, and spoke with another vet for a different treatment option. We have been working with her for over a week now, and the sore is looking better. It may take another couple of weeks for it to heal completely, but at least we are seeing improvements, and Mojo is not sick. I won't say Mojo is thrilled with his new treatment option, but he is tolerating it pretty well. 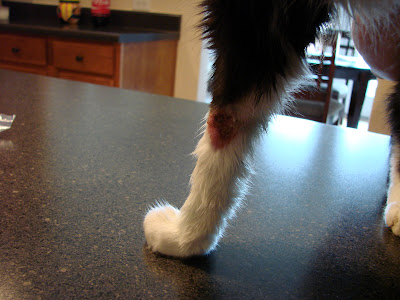 Here is a picture of the sore. The scab is actually bad for healing at this point. The point of his treatment is to soften the scab, so the skin realizes there is a sore there, so it will heal it like it is supposed to. 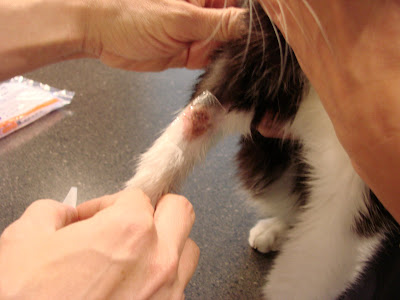 We start with a layer of BioDerm, or fake skin! This stuff is extremely sticky, but it works like a charm. 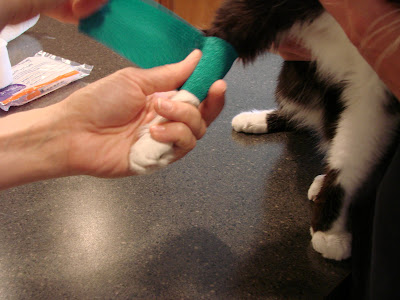 Next, we get wrapped. The store didn't have any red wrap, which is Mojo's color, but he is doing ok with the teal! 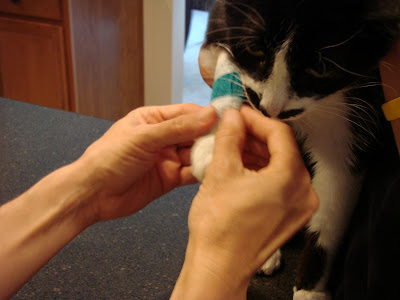 Next, he gets taped at both ends of the wrap, so it doesn't slip down his arm. 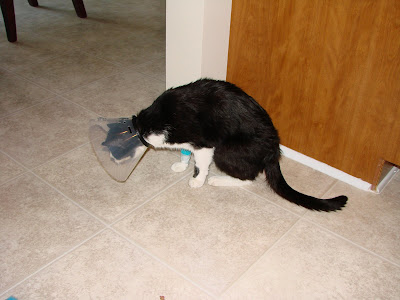 Lastly, we get the e-collar on, and he is not happy. He doesn't think he can eat, drink, or walk properly with this collar on. We take it off several times a day for him to eat, but you have to watch him like a hawk, because he can have the bandage off in a matter of seconds!

We hope that two to three more dressing changes and we will be able to stop, but we'll see. I know Mojo will be a happy camper once this is all over.