Devon has now lived with me for 5 years! I seems like yesterday momma Carol came into the Petsmart with this little creature wrapped in a towel. I was like what do you have Carol? She opened the towel and the cutest, smallest kitten I'd ever seen peaked out and my heart was gone. 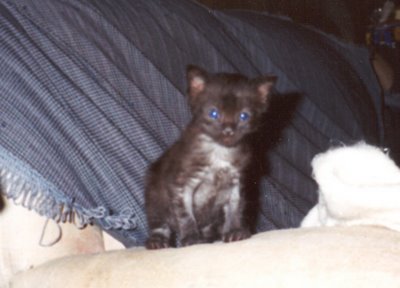 He is actually a couple of weeks older in this picture. He was affectionately known as "Bat Boy"!


I said I want him! I didn't know how to bottle feed at the time, and also had several foster cats that needed special attention, so she kept him. I checked on him daily and kept telling her I want to foster him. She said, he doesn't need a foster home, he needs a permanent home. So I decided when I had adopted out all the kittens I currently had, I'd take him. On Saturday, October 27th, 2001...Devon was mine! 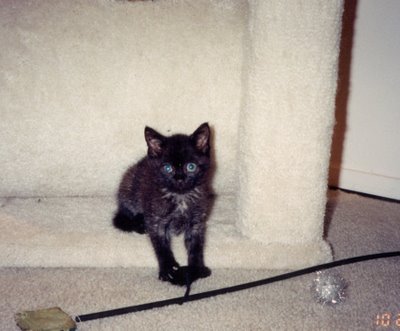 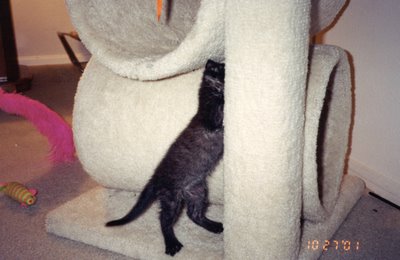 Devon was about 5 weeks old, but that didn't mean that he didn't need his bottle still! He was a bit spoiled, to say the least. We put down his dry food because Carol said he could eat it fine, and he just looked at it. We put down some canned food and he just looked. I said, he'll eat when he gets hungry, so we left him alone to play. Later on, we were re-heating our dinner in the microwave, and as soon as it dinged, he was in the kitchen screaming and meowing at us for his milk...he thought the 'ding' was for him! We gave in and made him a bottle. He did eventually start eating on his own. Now that he is 5, he begs for butter in the mornings and usually gets his way!

Devon was a bit sick when we got him, so to protect Smokey and my sisters cat, Dasha, I took him to the vet. He loved the vet! She gave him baby food and that sealed the deal. He tried and tried to get to go back to the vets office. He started out with a touch of a cold, hense the weepy eye in the photos. Then moved on to giardia. Then he about broke his leg and got to spend the night there! Of course there were routine kitten vaccines that he needed and dewormings. Then his neuter, which finally broke him of his love affair. (He was cryptorchid) For the first three to four months I had him, we were at the vet almost weekly...I was thankful when the affair was over!

It took several months for his fur to turn solid black, but it did eventually. He started out looking a bit rough...his fur was streaked and light, except for his head and extremities...they were dark. When the vet first saw him she said, Let me tell you something about this coat of his. He'll turn solid black before you know it...his coat is a reaction to stress, and it's turned white because of it. She said being bottle fed was stressful on a kittens body. Sure enough he turned black...he does have a white bikini and white underarms! 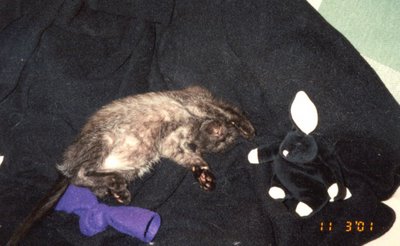 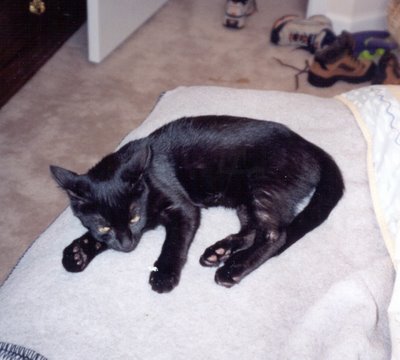 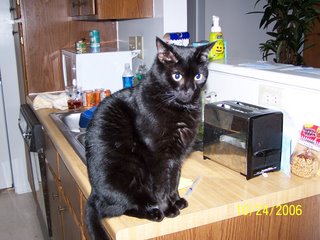 We'll end with a current photo of Devon. Happy 5th Anniversary of coming home to live with me Devon!
Posted by SuziQCat at 1:55 PM