I promised to dedicate this post to the favorite games of the boys, so here goes. Tanner is by far the most playful. Always demanding to play and looking at you with anticipation. I can almost hear him thinking 'she's about to sit and play with me, I just know it'. One of his favorite games is called Pokey Stick. Take one long stick, poke it under a mat or rug and out the other side...sliding it back under before he gets it! This is great fun, and hours of entertainment for him...he drove his pet sitters crazy with this game! 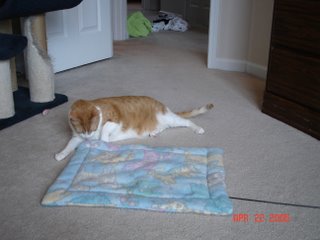 I know you're under there...come out!

Another fun toy is a flying octopus looking thing. It squeaks when you bounce it, and drives him crazy! His ultimate goal is to grab the toy, so he can chew the string in half. I have to put it up when we are done, or we won't have anything to play with next time. Here's a picture of the flying octopus... 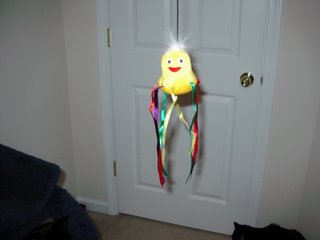 Another favorite game for Tanner is simply to chase a string or the tail of a toy under my legs while I am sitting on the floor. He loves to roll around my feet and can do some crazy acrobatics!

Last game for Tanner is the purple circular tube with 4 balls inside...There are openings on the top and the sides for arms to swat the balls and make them go around. Normally, I'll get on one side and he'll get on the other, and we'll try to hit the balls past the other one! It's a loud game, but it is a lot of fun. Sometimes he cheats though, and will just keep his arm inside the tube...you have to watch him!

Here's a shot of the tube...the blue vertical pieces have been thrown away...they had 4 string toys dangling from each of them, so you can imagine what happened. Yep, they were all chewed off within a matter of a few hours...so we got rid of the blue things making the toy more compact. 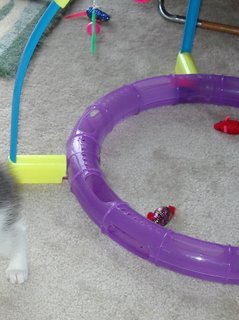 Since this post is getting long, I'll post on the favorite toys of the other boys throughout the week...So long and keep playing!