Anyone that knows Devon, knows that he is a ham. He loves to have his picture taken. He loves to have people talk to him and tell him he is beautiful. He loves to be the center of attention! What better way to 'Ham it up' than to go out trick or treating on Halloween? Dressed as a pig no less! So, that's exactly what we did last night. Devon was excited...he was prancing around looking so proud of the fact that he was going on an outing. I had the stroller packed in the car, along with the costume, and the gifts he was to hand out. I packed him in the carrier, and we were off...my sister and a friend went along too! He rode very well in the car, very quietly resting for the first stop.

The first stop was at his Godmother Carol's house. We got out, unfolded the stroller, put the pig hat on Devon, and tucked him safely in the stroller and made it to the front door. He was sitting up so proud, just looking around. Unfortunately Carol had had to run out and was not there at the moment. Her husband said she'd be back a little later, so we promised to stop by on the way home, and went off. Back to the car to take the costume off Devon, put him back in the carrier in the car, then fold the stroller and put it away.

The next stop was at Teresa's house. She was home! Devon was a bit more reserved at this stop, as Teresa's cats were very curious about him. Personally, I think Cecil was just jealous because Devon's stroller is better than his :) He kept staring at him, and going over to the stroller. Devon was not a happy camper, and was not in a good mood to wear the pig hat and have his picture taken. I was able to get a couple of good shots of Teresa's cats... 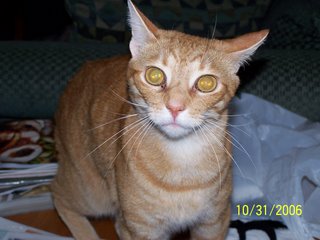 This is Cecil admiring Devon's stroller. Cecil also has a stroller and loves to go for rides in it. He is a ham just like Devon...they are two peas in a pod. It's too bad they don't get along better :) 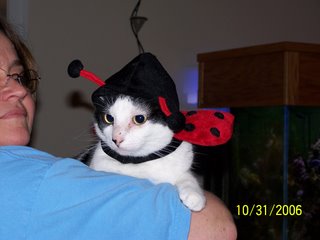 Here is Larry - the Lady Bug! Isn't he the cutest? He wasn't overly thrilled at wearing, but at least we were able to get his picture. Devon could learn something here :)

Devon received some wonderful treats from Aunt Teresa and the boys...kitty treats, a crown toy, a fun string on a stick (brother Tanner will probably take over), catnip mouse, and a noisey ball with feathers. He will get lots of use out of these wonderful gifts!

After we hung out with Teresa and her cats for a while, we went back to Carol's house. She was home this time, and was thrilled to see Devon. He actually let her hold him, and she petted him for a long time in his stroller. He was very good for her, which is rare because he normally likes to hiss at her. (Side note: She would come to the house for visits when he was younger, and she would have to bring treats to bribe him to be nice so she could pet him!) We had a little talk in the car though before we got there, and he was on his best behavior.

Well, that about covers our Halloween outing. I think Devon had a good time...he was ready to eat when we got home though. He is such a fun cat because he is pretty tolerant of the crazy schemes I come up with for him. I'm debating about doing Santa photos again this year with him at PetSmart. I'll keep you posted...
Posted by SuziQCat at 10:39 AM