Introduction to the boys

I am new to the world of blogging so I thought I should start off by telling a bit about the 'crazy cats'. They are also affectionately known as 'my boys'. They vary in age and craziness but are all wonderful and sweet cats. They are all indoor only, neutered, and super spoiled. They are not declawed. 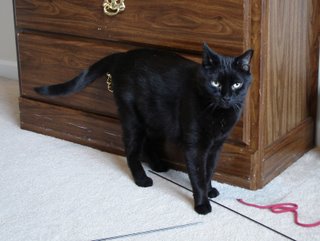 Smokey is the oldest. He is 10 years old. I've had him since he was about 6 weeks of age. He is the first cat I've been responsible for as an adult. His nickname is the Goose. Smokey loves to be held and give hugs. He'll wrap his arms around your neck and just purr and purr. He loves to knead his paws on my face or neck depending on how he is being held or laying. He's a sweetheart, that's for sure and I'm thankful that I chose him all those years ago! 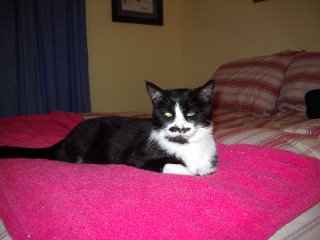 Mojo is the next oldest. He is currently 9, but will be 10 on Sunday. He was 8 years old when he came to my house as a foster cat. He is super sweet and loves to play, now that he is feeling better. He came to us with lots of medical problems, but after a year of surgeries and tests we have figured out that he has severe environmental allergies. He's an indoor cat, but the pollen and stuff still bother him. He is currently doing the immuno therapy (or allergy) shots and they are helping to desensitize him to the allergens. 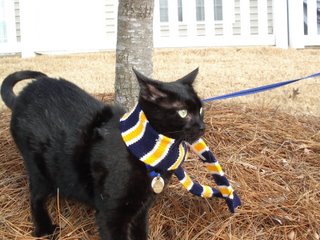 Devon is next and he is 5 years old. I've had him since he was 4 weeks old, and still needed his bottle some. He had been found in the woods when he was 10 days old, and was bottle raised. He is very people oriented and still does not believe he is a cat. He loves to wear eye shadow and a bit of hair gel, so he can have spikes. He wears bandannas and scarves and rides around the neighborhood in his stroller. He also loves to walk on a harness and leash, and has been in a wedding. I think he's the craziest of them all! 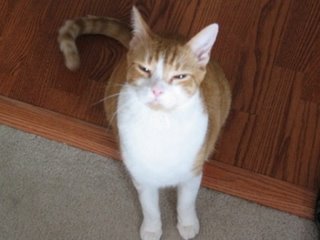 Tanner is the baby, and he is 4 years old. He was my first true bottle feeder baby, as he came to live with me when he was 13 days old. His mom was a feral cat, and she buried him in the litter box in the cage she was living. He was removed from her and placed on another nursing mom, who did an ok job, but by day 13 he wasn't thriving as much, so he was pulled off and given to me. He didn't take to the bottle like I had hoped, but after a scary first weekend he got it and never looked back. He is a definite Momma's Boy. When he was 2, he was diagnosed with Hypertrophic Obtrusive Cardiomyopathy (HOCM). He is stable at the moment, and takes a pill twice a day. We go back to the vet school in December of this year for another evaluation.

Well that's them! They are gorgeous boys, even if I am their mom.
Posted by SuziQCat at 8:22 AM