Well, the story you've all been waiting for...Big welcome for guest blogger Auntie!

It all started about 4 years ago when my sister and I were watching the Winter Olympics. Canada seemed to win a lot medals that year and every time Pirate would hear their national anthem, he would start meowing and raising his arm. He did this every single time the Canadian anthem came on. If he was sleeping, he would even wake up to sing along with them. I guess he knows the words since he's Canadian. Then we started asking him if he was Canadian and he would just start talking and raising his hand.

Pirate also enjoys the snow, not that we get much around here. But when we do, he's always outside (supervised of course) longer than all the others. He's not scared of the white stuff like his cousins and sister. He gets so excited and loves running around in the snow. 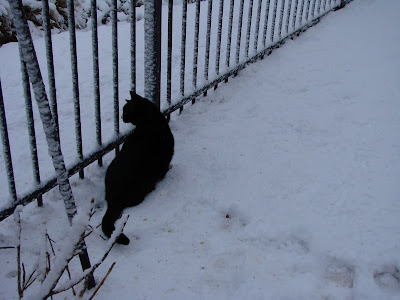 Now that we know Pirate is Canadian we celebrate Canada Day which is July 1st and Canadian Thanksgiving which is in October. I'm not exactly sure what the national food is for these holidays, so we have an apple, which is Pirate's favorite food. 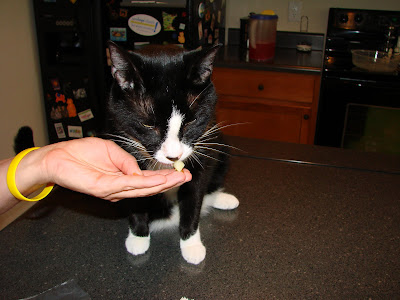 Well, there you have it...Pirate the Canadian Cat. We'll see what happens tonight when the Olympics start up again. We are a house divided :) Go Team USA! Go Team Canada!