I've said many times that fostering kittens was a lot of hard work but very rewarding. Here are a few kittens waiting for dinner. Love all the helpers! 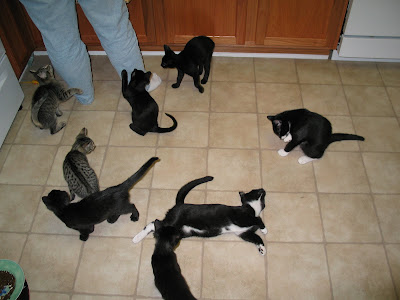 Our foster coordinator knew that black kittens were my weakness, so we always had a house full! The two black and whites were a bit shy, but were adopted together. They were sweet boys that just needed some patience to come out of their shells.

One of the brown tabbys and a black one were rescued from some brush by a man who had started to burn the pile when he heard their cries. They were just a few days old. They would both fit in the palm of your hand. Kayley lost a bit of her tail, otherwise they were both fine.

The other black ones and the brown tabby were supposed to be a group we watched while their foster mom went on vacation. We had them until they were adopted :) They were the 'C' group. Cole, Caleb, Cathy, and Caitlyn. Those boys were a mess...it took them forever to start eating from a plate. They wanted their bottles as long as we would give it...tough love won out though and they switched to a plate :) 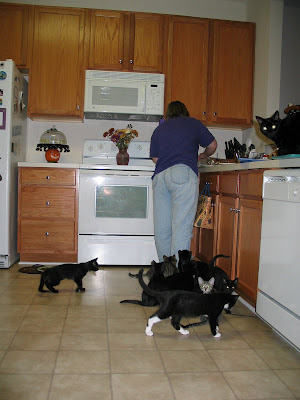 Devon hanging out on the counter staying away from the munchkins! 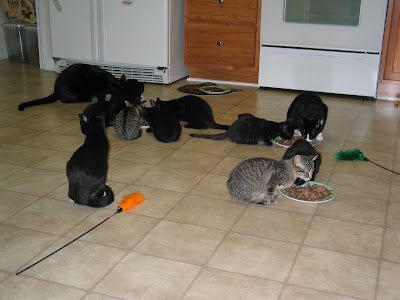 Finally, I finished with the plates and everyone sat down to eat. 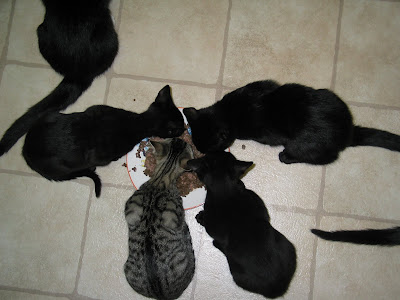 Kittens eat a lot and are quite messy! Mixing dry with the canned to get them used to eating that...weaning is always fun :) 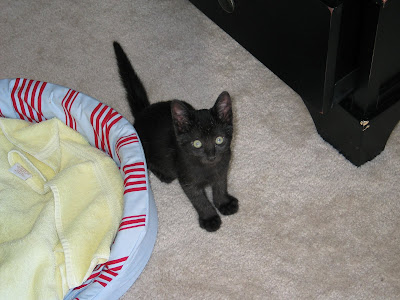 This is Harrison. He is one of the fosters that was very tempting to want to keep. We had him from just a few days old. He was quite sick, and we weren't sure he would make it. He didn't know how to suckle on a bottle because he was so congested, so we syringed him for a while, and then he learned how to drink from a spoon. We would mix his KMR with som AD canned and he would slurp from a spoon! He was adopted to a wonderful home that continued to spoil him rotten. He was full of himself to say the least :)
Posted by SuziQCat at 10:10 AM
Labels: Flashback Friday, fostering