The boys have had a fun week.  Everyone is doing well now.  Flynn felt puny for a couple of days, but seems to be better now. 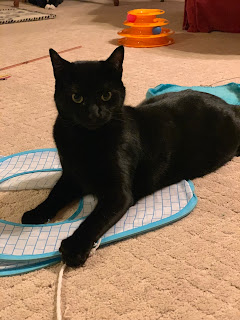 Harrison hasn't had a photo posted in a while, so I tried to get one of his this week.  Here he is playing with a string and his igloo.  He has been very frisky lately, asking to play and snuggle daily!

I broke out the laser pointer and the boys have LOVED running up and down the hall!  We added this carpet runner, so Pirate could move around easier.  It was hard for him to walk on the hardwood floor.  The first cat down is Harrison, Flynn runs back and then Oliver takes a turn and attacks the wall!

This video shows Rusty running down the hall.  It took him longer to catch on to the idea and understand what you were supposed to do, but he loves it now!