Well, yesterday was the big day for Flynn and Rusty.  We headed over to the vet bright and early.  They were both starving!  Rusty sang the entire trip, and continued until we were placed in a room. 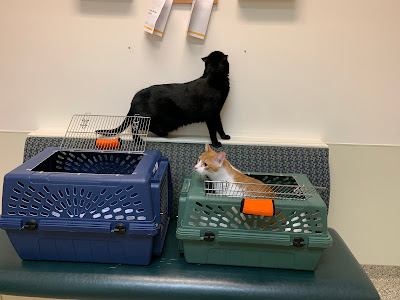 There was no window in this room, so Flynn wasn't sure how he would escape!

The schedule was pretty light, so the tech thought they would start early on them.  Rusty went first and did great...no extractions needed!!

Flynn was next, and he also did great!  No extractions for him either!!  He does have a little bit of bone recession so they did a gel sealant under his gums to try and help.  Otherwise, they both looked great! 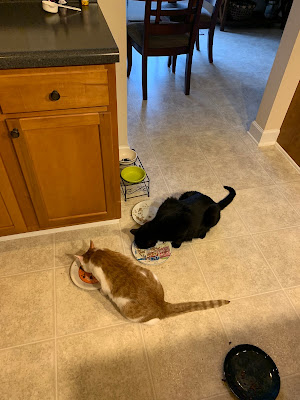 Rusty sang all the way home, and they both bolted out of their carriers and headed to the breakfast plates.  I let them eat that, and then waited about 45 minutes before giving anything else, just to make sure they didn't have an upset tummy from the anesthesia.  They were both just fine, and came back for dinner when I offered it. 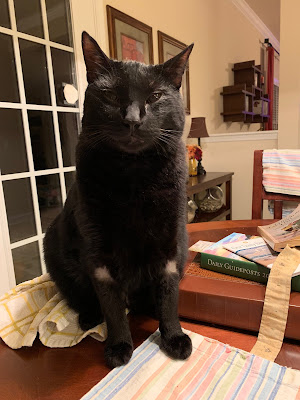 Flynn was super loving and high as a kite from his meds!  He just wanted to be snuggled and talked to.  Rusty was suspicious and didn't want to have anything to do with me!  He wasn't about to caught and shoved in that carrier again.

Flynn is still pretty tired acting this morning so I'm hoping by this afternoon he will feel more like himself.  He should be able to rest while we are at work.

Rusty was watching his birds, and his eyes are back to normal...no more large pupils.  He hid when I started to leave, again, not taking any chances on getting snatched up!

Thank you all for your kind words, positive thoughts and purrs.  The POTP helped my boys and my pocketbook :)

Posted by SuziQCat at 9:34 AM
Labels: Dental, Flynn, Rusty, VET