So Tanner has a lot to talk about this week and could use some purrs. 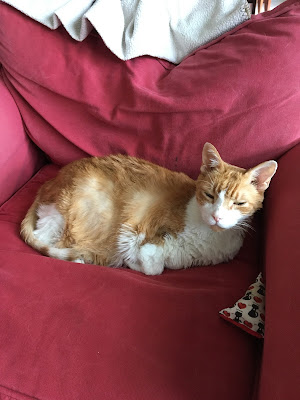 He started vomiting some last week, so I went ahead and added a second dose of pepcid each day to help his stomach.  On Thursday, Auntie came up and said, you have to take Tanner to the vet this morning...he is leaking diarrhea, not eating, and he stinks!  So I got ready, verified his doctor would be in the office, scheduled a drop off appointment and headed out.

I heard from the vet around lunch time and he had done some x-rays or something.  Tan's pancreas was inflamed.  His bowels were full of gas and diarrhea.  He had taken blood work, gave fluids, nausea meds, and we had meds to take home for the diarrhea.

On Friday, the blood results were in and it was confirmed he was having another bout of pancreatitis.  He also had a raging UTI.  His liver values came back elevated as well as his sugar.  The vet was concerned that he was diabetic, so another blood test was ordered.  I swung by the office and picked up an antibiotic for the UTI.

Saturday, Tanner is still not eating, but the diarrhea is getting less.  I'm not sure he realized he was leaking the way he was...he was probably just passing gas because he wasn't trying to get to the box.  The vet called and said the Fructosamine test results were not back yet, so it would be Monday before we learned whether he had diabetes or not.

I continued to give fluids at home.  I was syringe feeding him canned food with water to help keep some strength, and of course doing tons of laundry!

Monday, the vet called with good news.  Tanner is not diabetic!  I mentioned that he still wasn't eating, so we have added an appetite stimulant to the mix.  I am to call back on Thursday with a report.

So how is Tanner doing now?  He has played a little bit with his girl.  He walks to the food bowls, but doesn't eat.  The diarrhea has stopped for the most part.  I am still syringing food and giving fluids.  He isn't washing himself, but seems perky.  I am hoping he will start eating on his own soon!

Posted by SuziQCat at 8:41 AM
Labels: Pancreatitis, Tanner, VET