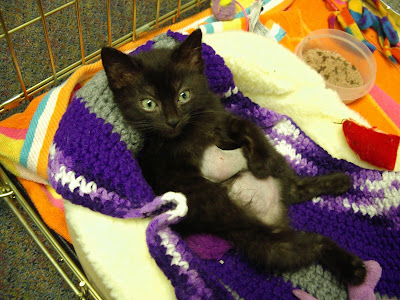 This post combines two themes...Tummys on Tuesday and Flashback to Fostering! This is Derek. He is a kitten we fostered back in 2003. He came to us with what was thought to be neurological problems because he was so wobbly. We later determined that he was extremely weak, so food helped in that regard. (You can tell by that buddha belly above that he loved to eat!) He also didn't walk around a lot and when he did he limped.

We took him to the orthopaedist and he determined that there was a massive infection of some sort in his joints, primarily the elbows. We started on three times a day antibiotic injections (I learned how to give shots with Derek). It's amazing what we'll learn how to do for our babies! Because of the time schedule of the shots, I brought Derek to work everyday with me, and he hung out in my office. He was the sweetest little fella, with no meow, he would just open his mouth at you! It would melt my heart every time and I'd have to hold him.

After three weeks of the shots and fever reducer, etc...Derek was not getting any better, and in fact, was getting worse. The infection was spreading and more joints were impacted and he was in pain. It was determined that he had some sort of auto-immune disease that was attacking his little body, and we made the decision to have him euthanized. I had only known Derek for 4 weeks, but I'll never forget him.

Derek's ashes are in a sugar pot on my mantel because I had already decided if he were to get well, I'd adopt him. The rescue group was wonderful in letting me keep him forever!
Posted by SuziQCat at 10:07 AM
Labels: Derek, fostering, tummy