The other day when I posted pictures of Pirate, some of you were unsure about who he is...so I thought I'd take a day to write about him. My sister and I live together and we each have cats. I have Smokey, Devon and Tanner currently. She has Pirate and Sophie.

Pirate came to live with us in 2003 as a kitten. He had a stump of a leg, or a peg leg, hence the name Pirate. He could get around fine, but he would continually hit the stump on something and just shake it off...I image it was like hitting your funny bone or something. The stump kept a sore on it from being hit on things. The decision was made to have the stump removed up to his hip. He spent one night at the vet and was back home. He healed really quickly, and without that part of a leg, he was able to get around much better. He can climb stairs like a champ. He can jump, but not high enough to get on the counters...he is one of our best cats :) 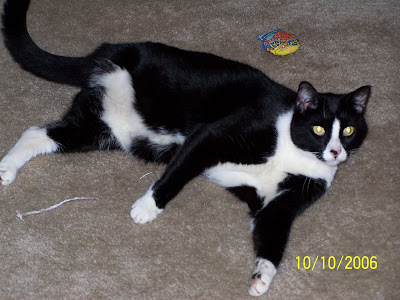 He loves to play with fevvers especially and Da Bird is one of his favorites. He can wrestle with the best of them too. The main problem with have is because he is slightly curved, when he runs at the others, he looks threatening, so they (mainly Tanner) are afraid of him at times. Other than that, he is just like any other cat. 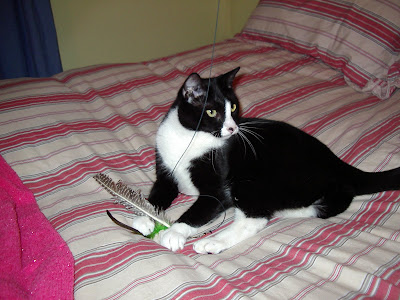 His tail is super thick to compensate too. The vets have to alter where they give some of his shots because of the missing leg. He is also a bit sensitive to you messing with the remaining leg. He potties fine and loves to dig! 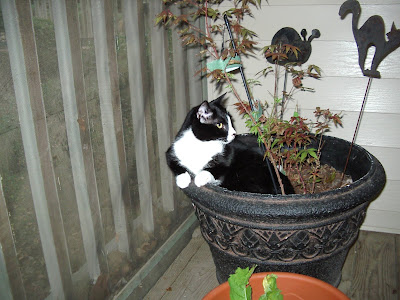 Don't think though that he doesn't get into any trouble...he can find ways to be naughty just like his cousins! Here he is in a potted plant on the porch at the apartment.

Well, that's Pirate. I'm trying to get my sister to be a guest blogger and explain why he believes he is Canadian. I think she'll be posting soon to tell that story...since the Winter Olympics are about to start up again and they are in Canada this year.
Posted by SuziQCat at 9:04 AM
Labels: Family, Pirate