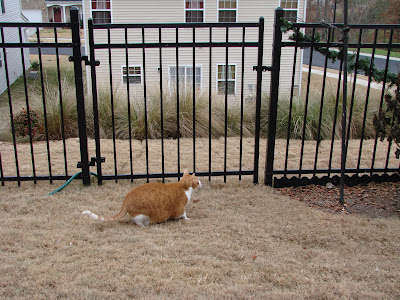 Last Friday, this big snow storm was heading our way...we were supposed to get several inches. I realize for some of you that isn't much, but it's a pretty big deal down here. Anyway, the flakes started falling, and we took the boys out to play for a while. Tanner immediately started watching the birds who were unafraid and coming out to the feeders because it was so cold, even though we were all out there. 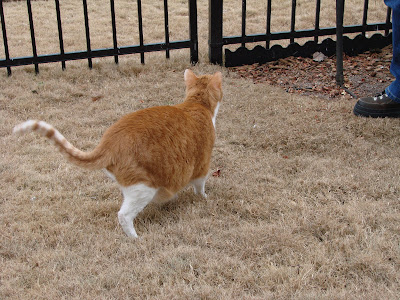 Tanner is a bit late for Hunt Week, but he can stalk birdies with the best of them. He's never actually caught one, but he did jump up and touch one...it kind of scared him! 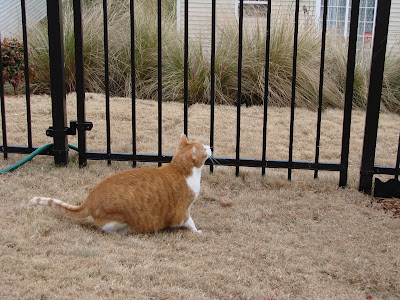 Back to the non-existent snow...we had some snow for a while, and then it turn into sleet. You coud hear it whacking on the windows, and was quite loud. Finally we switched to all rain, and the roads were fine again. What a bummer :) The boys did enjoy watching the flakes fall while they lasted though. I think snow is so beautiful! 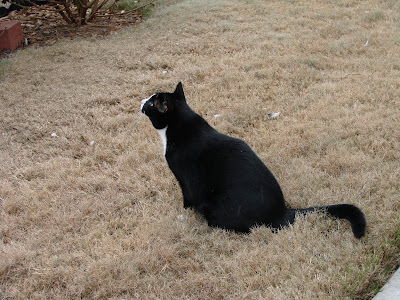 Pirate also enjoyed all the birds flying around and eating...He loves running around in the grass, and he loves snow too! Afterall, he thinks he is Canadian, but that's a story for another time. 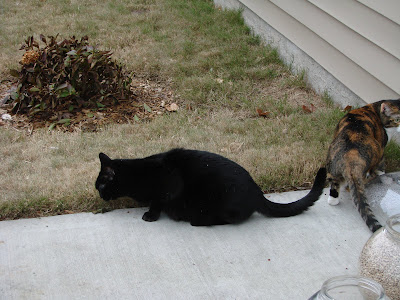 Here's Smokey and a bit of Sophie...they could care less about the birds...they just wanted to chow down on the now brown grass. If you look real close, you'll see a few white specks on Smokey...that's the snow! :) LOL

There are no pictures of Devon this time, because he thought it was too cold and asked to go back in earlier.
Posted by SuziQCat at 9:56 AM
Labels: Pirate, Smokey, Snow, Sophie, Tanner