The cold and flu season

Tis the season for coming down with a cold, and that is no exception for the boys. Tanner had been sneezing for several days and just laying around. He becomes a real snuggle bug when he doesn't feel well...a definite momma's boy! He is doing much better now though...we like to treat with extra canned food, and pump it full of L-Lysine. This seems to help keep things from getting worse. We were lucky with him, just about a week of sneezing and a runny eye, and we were all better. Here he is just sleeping away. Poor Baby! 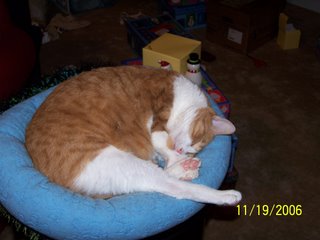 Smokey on the other hand is battling, what I think is allergies. He has had issues with his eyes swelling and itching for several years now. Typically I can treat him with an antihistamine and he clears up, but lately, nothing seems to be working. We have an appointment with the vet school dermatology department in January. I hope they can test him and find out what the cause of his reactions are, so we can help him. He will be seeing the same doctor as Mojo. She is the best, and has done wonders for Mojo! I wonder if the vet school gives a multiple pet discount? This will make my third cat that goes there...I hope Devon doesn't start to feel left out! :) Here's a picture of Smokey when his eyes are swollen and irritated. He has a bit of colored discharge, so I've started him on a different eye drop...they seem to be helping him some. I'll have to give him some lysine too! 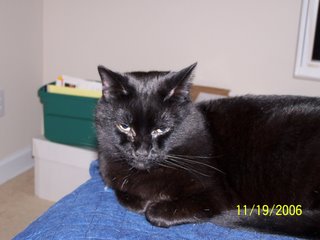 Well, I hope the boys will all start feeling better soon, and that it won't spread to the other cats in the house! Next time I'll introduce you to the cousin cats that live with us too...they belong to my sister...more on them next time.