I have lived with my sister since I graduated from college, we'll just say, several years ago :) She and I get along well, and have lived in a few places since then. We started in an apartment, then bought the townhouse, then sold it and moved to another apartment, and are now in the new house. Well, I should tell you a bit about her cats...mine aren't the only ones that are crazy! In fact, I think hers are a bad influence on mine! :) 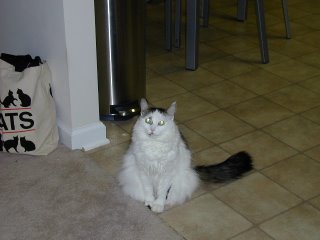 DASHA - This was her first cat, and she got Dasha the same time that I got Smokey. Dasha was a long haired ball of fur, and she looked like a Christmas tree when she sat down. Unfortunately Dasha died suddenly when she was 7 years old. She and Smokey were good friends. 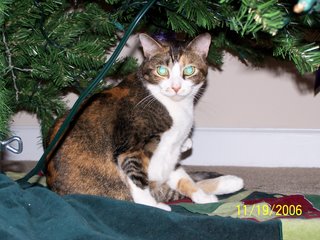 SOPHIE - When I got Devon in 2001, he was such a little terror at times, that the vet suggested we get another kitten to help him. Sophie became that helper. She is a good girl most of the time, but can be a bit annoying. She hasn't quite grasped the idea that I should sit or lay down when I am in someones lap asking for attention! She was good for Devon though, and they have become good friends. She is one of the most social cats we have...she is always looking for someone to rub her tummy, even a complete stranger isn't safe! We once had a repair man over to fix something, I don't remember what, and he bent over to pick something up, and she jumped up on his back! At least she has grown out of that habit!

When Dasha died, we were fostering a kitten named Pirate. We'd had him for about 3 months, and he was starting to grow on us. He only had three legs because he was born with just a partial back leg. It would bang on things when he jumped and always had a sore on it...so the rescue group we were with decided he would do better to have it removed. They were right! He got along so much better once it was gone. It seemed right that we take him in since we had been through a good bit with him already, and we had a void in our home. He got along well with Smokey, Devon, Tanner and Sophie, so it was a natural choice. 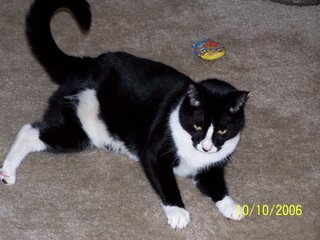 PIRATE can be a bit ornery, but that makes him unique. He loves to spin around on his one back leg! He is one of the best cats because he can't get on the kitchen counters! He loves to play and can run up and down the stairs with the best of them. One of his craziest ideas is that he thinks he is Canadian! The Canadian national anthem came on during the Olympics and he just talked to the tv and raised his front arm, like he was saluting or something. We would ask him, "are you Canadian?" and he was just talk and talk.

Those are the crazy cousins...Everyone gets along quite nicely most of the time. We had a few rumbles every now and then, but nothing serious. I think they are just having a bit of fun! Craziness abounds at our house!
Posted by SuziQCat at 2:51 PM