Hurricane Florence is still trying to make her way out of the state.  Thankfully, her path shifted, prior to landfall, and did not make a direct hit on our city.  She basically went around us, but still brought many bands of rain and wind. 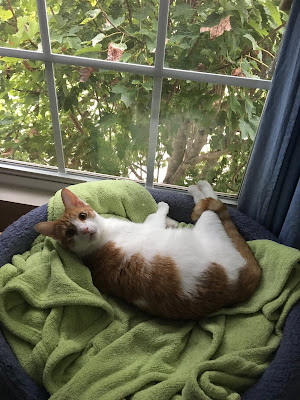 This was Rusty's first hurricane and you can see that he isn't too concerned.  We had a pretty steady, but slow rain Thursday-Sunday.  The winds came in gusts, so they weren't constant.  We had removed most things from the yard.  The trash can blew over a couple of times, I guess there wasn't enough litter in it!  The birds were still coming to the feeders, so we left them out. 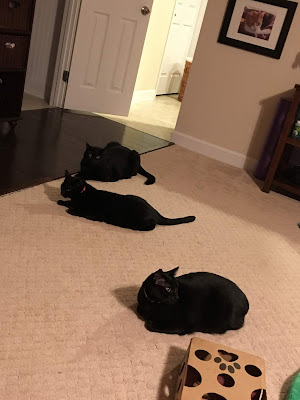 The panthers (back to front Flynn, Harrison and Oliver) had plenty of food in the house, as did the humans.  We never lost power, although it flickered a few times.  The cable went out a couple of times, but would come back on after it reset itself.  We did not eat all of our snacks! 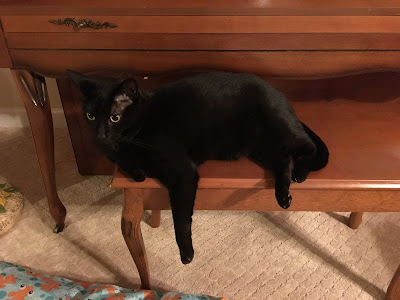 After having me home since Thursday, and Auntie since Friday, Oliver was done!

Last night and this morning, we had the worst storms so far.  We were already over 5 inches of rain at our house, so this deluge didn't help.  We had lots of heavy rain, thunder, lightning and now flooding around the town.  It took me over an hour to get to work, a normally 25 minute commute.  There were many detours and closed roads to navigate around.

I plan to leave early today to make sure I am home before it gets dark.  Down East the flooding continues, and those parts of the State could use your prayers and dry thoughts!