Today, we have a two on Tuesday...Two kittens!!  As you know, Ollie has been with us since he was three weeks old.  He has done very well, but kittens need friends their own age and size to play with.  Ollie needed to learn more about being a kitten.  Tanner was doing a great job, but it isn't the same.  So Auntie adopted a kitten Ollie's age...his name is Georgie.  We have had Georgie for a week and a half now, and he and Ollie are fast friends! 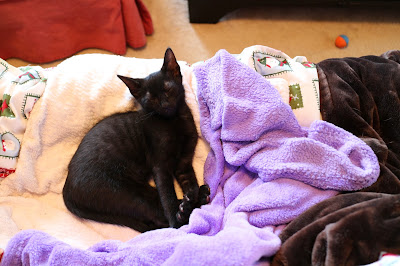 Ollie wiped out after some play time with his new cousin.  These two love to run and play and wrestle.  Ollie is learning more about acceptable play, and does not bite as much as before!!!  He is still a momma's boy and I love that! 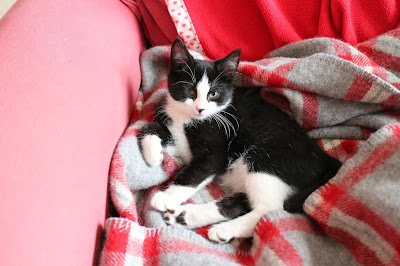 This is Cousin Georgie!  He is a love bug, and super sweet and snuggly.  He is a very floppy kitten and just melts in your arms when you hold him.  He loves to lay on laps and has been comfortable in the house from day one.  We had a bit of growling and hissing, but that has all stopped now.  He loves to play with Ollie and can hold his own in the wrestling matches.  He is short and stocky and weighs a few ounces more than Ollie. 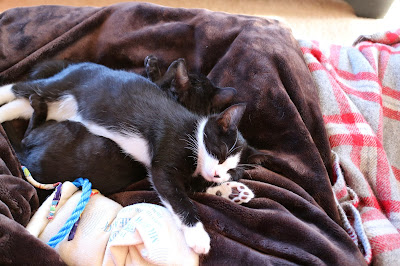 Here are the two boys after a play session.  We laid them close to one another while they slept, so they would get used to each other.  Georgie, who grew up with other kittens, decided it was better to lay on top of Ollie than beside him.  Ollie had never experienced this behavior and was purring up a storm!  Everyone deserves a best friend.

Posted by SuziQCat at 10:46 AM
Labels: Cousin Georgie, Ollie, Two on Tuesday