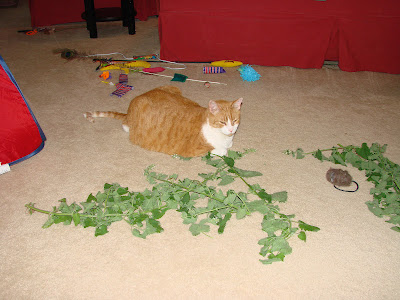 This edition of Mancat Monday will focus on the largest of our mancats - Tanner.

Tanner has had a few changes take place over the last few months.  You might remember we started him on an anti-anxiety medicine called Amitryptaline (sp).  He used this for one month, it was an ear cream.  We saw some behavior improvements in him, but it was not his miracle drug.  We switched over to Reconcile (Prozac).  This has given us the results we were looking for...no peeing anywhere but the box, not nervous around the other cats (primarily Pirate), able to stand up for himself if a bopping match starts, all around a calmer, more confident cat.  We are pleased!

We tried the diet that Disco has been on and doing so well with...we had limited success.  Tanner just simply eats too much.  We have now moved to the prescription diet recommended by the nutritionists at the vet school.  This is working well, and Tanner and his brothers are learning how to eat on a schedule.  This has been a huge adjustment for them.  The main problem for some of them (Devon) is that he hasn't learned to eat enough when the bowl is available.  Then the next time it is available, he over eats and gorges himself.   Anyone that has switched to a scheduled feeding have any suggestions about how to help Devon understand?

Tanner's Diet - Royal Canin Satiety Support, he gets 1 cup a day, and typically doesn't eat it all.  He still gets canned food in the evenings.  He started at 19.6lbs, and is now down to 18.14lbs...we are making progress.

You can see the boys still get plenty of fresh catnip to munch on, especially on the weekends.

That's about it...happy Mancat Monday to you all!
Posted by SuziQCat at 8:03 AM
Labels: Mancat Monday, Tanner