Harrison and Flynn needed to get an extra round of deworming this past weekend.  We found two tape worms on Flynn's back end, so figured we should treat them both.

Well, this was a traumatic experience for the boys!  The pill they gave was quite large, but I figured we could just push it down, like I do with Tanner and his huge potassium.  Well, this pill doesn't have the same coating on it, and must be bitter because both boys ended up foaming at the mouth and the pills were back on the counter!

Auntie suggested we break the pill in half and give it in smaller amounts.  She used her slimmer fingers to get the pills down and I was armed with a syringe of water.  Success!

They didn't know what was happening to them and their hearts were just pounding!  I do believe they over reacted just a touch, but our house is known for having drama queen boys.

They both slept well that evening and couldn't even play they were so wiped out.  Thankfully they shouldn't need anymore of that dewormer! 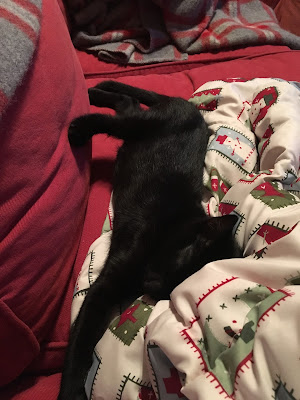 Harrison came and laid next to me on the couch... 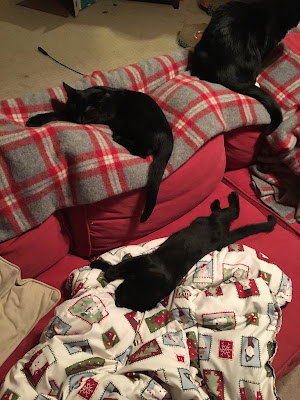 Flynn is in his favorite spot on the back of the couch...the other cat is Cousin Georgie.

Glad to have that behind us.  Harrison and Flynn go Thursday to get their last FVRCP vaccination and their rabies vaccine.  We should also be able to schedule their neuters at that time.