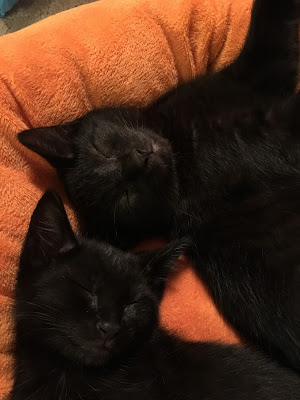 I have been looking for quite some time now for a couple of kittens to add to our family.  Tanner as we know loves babies and since he is feeling and doing so well, I thought a couple of babies for him would be a nice treat.  Plus, it has been seven years since we have actually been the "Four Crazy Cats!"

Originally, I was looking for a black kitten and an orange/orange and white kitten.  Life has a funny way of changing our plans.  I put the request out to a couple of friends in the rescue world and these two black kittens were presented to me as an option.  I said I would meet them and after seeing their sweet, out-going personalities I knew they would fit right in at the house.

I knew the risk, that Tanner may not take to them as quickly because they are older than Oliver was when he first came to us, but I thought Oliver and Cousin Georgie might like them better since they will already be playing and active.  Wow - When did getting a kitten become so complex? 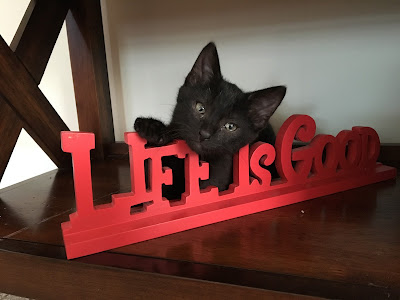 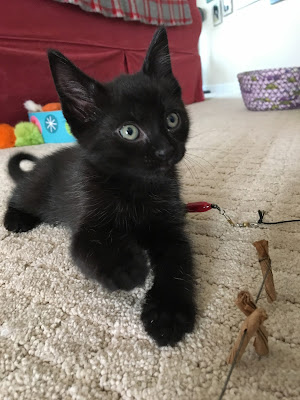 Harrison Dean is a touch younger and weighs 2 pounds even. 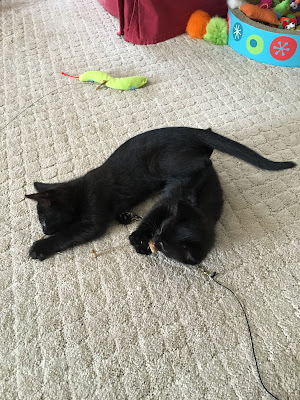 They are not genetic brothers but have been brought up together so they are very close and good playmates. 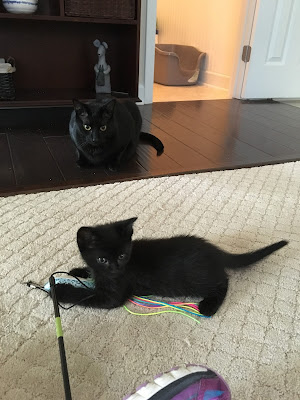 Oliver is not so sure what to think and is a bit jealous.  He is getting better each day and I try to give him lots of individual attention and keep our routines.  He has returned to our bed at night and is asking for snuggles again.  He will hiss and growl if the babies get too close to him still. 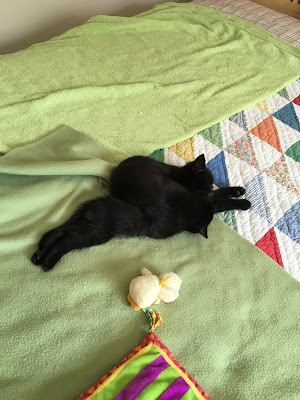 The boys have been staying at a vet's office and are used to being toted around.  They love people and are very adventurous.  They are not fazed by the hisses they are getting, so that is good. 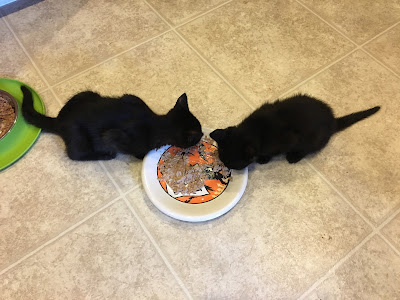 Flynn on the left and Harrison

They are pretty good eaters, but you have to remind them sometimes to eat because they are so busy playing!  They will run up to you just meowing and then eat like they are starved because they have waited too long!  Same with the potty...a black streak will zoom by on a mad dash to the litter box. 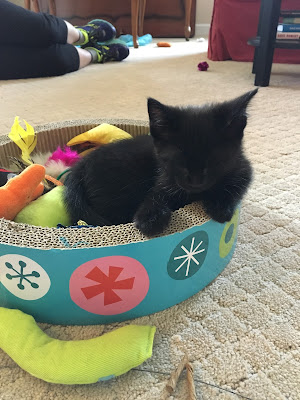 They play hard and then crash...Harrison couldn't make it out of the toy box... 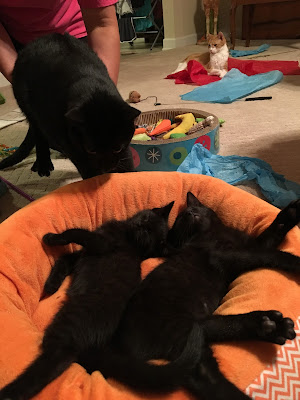 A picture of all four.  Tanner, although not as mothering as he was with Oliver, is still attentive.  He hangs out in the room with them.  He has stopped hissing and is trying to engage in play.  He loves when they get his tail.

I think in a couple of weeks, our house will be settled once again.  There will be many more posts featuring the two additions.  I had forgotten how hard it was to photograph moving small black fuzzies!

Harrison and Flynn have their first vet appointment on Thursday afternoon.  They have been FeLV/FIV tested, negative and dewormed, but that is all.  They need to start their vaccine series and get ready for a neuter.

Welcome to the family Harrison and Flynn!