These photos were supposed to go up yesterday for a Mancat post, but this human is a slacker, so they will be presented today :) 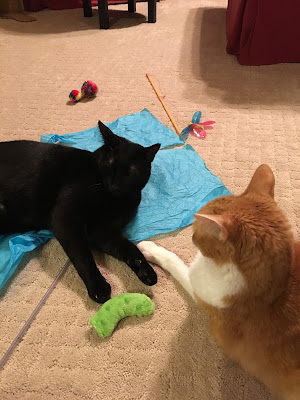 Tanner and Oliver are the best of buds...I loved that was able to catch them lying close together and even touching paws... 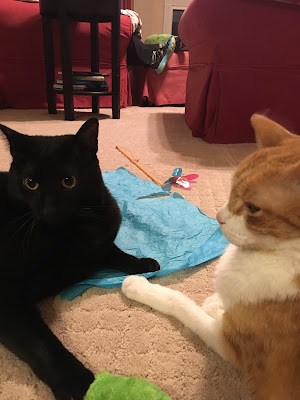 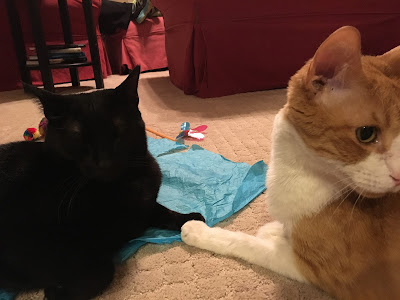 Love these boys of mine!

Tanner could use some purrs this week, especially on Friday.  Over the past several weeks, he has been itching more and pulling at his fur.  He has had a runny eye and some sniffles too.  Although he hasn't suffered from environmental allergies in the past, it was determined that he is being bothered by them this year.  He has been getting lysine in his food to help with the eye, and antihistamines to help with the sniffles and itching.  Although it wasn't really helping like I thought it should.

Yesterday, I went ahead and took him into the vet to see if there was something stronger we could give him.  He has woken me up in the night numerous times washing and licking and pulling his fur, even though he just had an antihistamine.  It was time to look for some relief.

The vet agreed it was seasonal allergies and said many first-timers were coming in this year.  We talked about antihistamines and he said sometimes they just aren't effective in cats like we would hope.  We discussed steroids and agreed to do a depo injection.

He continued his exam of Tanner and found a suspicious mass in his mouth.  We are scheduled to have it removed on Friday and they will do a dental while he is under.  The mass will be sent off for biopsy.  Tanner could use some purrs, specifically:

1) For the antihistamines to help him this week, since we couldn't do the depo injection yet.  We are increasing his dose though
2) For an easy removal and dental cleaning on Friday
3) For Tanner to remain comfortable this week (mass was bleeding after vet messed with it) until it is removed
4) For Tanner to be comfortable after his surgery
5) For the mass to be benign

Thank you all...we have pulled Tanner through a lot over the years, so let's try again!