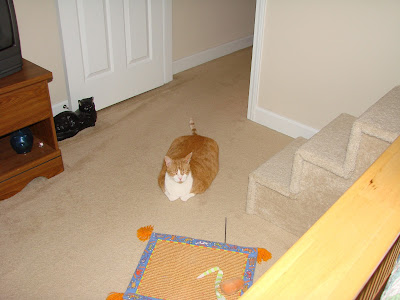 Auntie and I were at the beach this past weekend, so the pet sitter was watching the boys.  I wondered how Tanner would do on his diet because in the evenings, we give food several times in small portions.  The pet sitter would give just two meals a day, so it would be an adjustment for Tanner and Pirate (the only ones that can't get in the cage).

We came home and checked the notes that were left and found a funny incident had occurred!  Some cat (we are thinking Pirate) decided he was hungry, and reached into the cage, pulled the bowl of dry food over to the edge and turned it over!  The two non-collared cats proceeded to eat a fair portion of this spilled food.  The pet sitter moved the bowl more towards the opposite side of the cage, where they could not reach it, cleaned up the spilled food and went home.  The next day, she found that the sneaky bowl maneuver was attempted again, this time by trying to pull the rug over, so they could reach the food bowl again!  The bowl was still too far away, so no extra food was eaten that day.

Tanner's weight loss this week was slowed a bit, but he still managed to lose 1/2 of an ounce!  His current weight is 18 lbs 8 oz.

We'll see if this low number is a result of eating the forbidden cage food, or if his body is getting comfortable with the calories we are giving, and we need to change things up a bit.  I'll be calling the vet today to give a report.  I think she will get a kick out of these sneaky boys!
Posted by SuziQCat at 6:30 AM
Labels: Tanner, Weight Loss