Many of you already know that Tanner has a heart condition called HCM.  When he was at the vet school last June, it was determined that he is at an increased risk for blood clots.  Therefore we decided to try him on an aspirin therapy, for prevention.  We tried taking 1/4 of an 81 mg pill every three days...Tanner could not tolerate this medication.  Severe vomiting occured each time we tried to start.  We tried about three times, in case there was something else going on with his stomach at the time.  Each trial produced the same results. 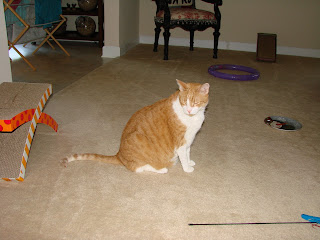 After speaking with his cardiologists and his regular vet, we have decided to try him on Plavix.  This drug is relatively expensive, but I hope he can tolerate it.  He will take 1/4 of a pill each day.  I have a months worth at the house, and we will be starting tonight. 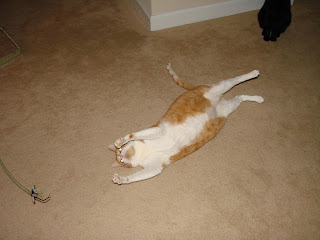 I would like to ask for some purrs that he can tolerate this drug, as there aren't any other options for prevention for him.

On another note, he has lost almost a pound of weight!  We are very excited about this, and continue to work on his diet for more loss.
Posted by SuziQCat at 11:20 AM
Labels: HCM, Purrs requested, Tanner