Sammy and Andy were tagged yesterday by The Kool Kittie Krew...they invited anyone to play along, so we thought we'd give it a try. The instructions are: 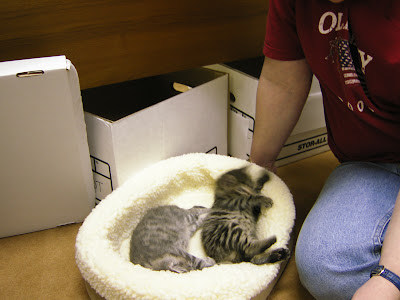 Since this is also my normal Flashback to Fostering post day, I went to the foster kitten folder...this was the 10th photo. These kittens were Sadie (the brown tabby) and Eagan (the silver tabby). We only had them about a week before we moved them to another foster home. In this picture, these kittens are hanging out at Aunties office during the day. Auntie and I were both very blessed and fortunate to be able to bring kittens to work when they needed special attention or bottles or something. Sadie and Eagan were adopted into loving homes. Here's the reason we needed to move these kittens to another home... 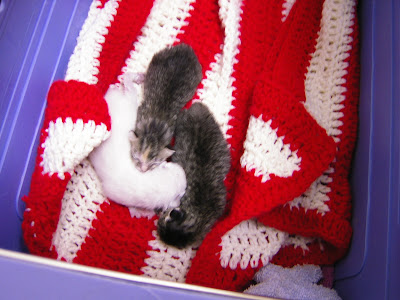 We recieved a call from a local shelter that a mom cat had given birth overnight. She was feral and had already (probably by accident) dropped one kitten in the water bowl and she drowned. They wanted to pull the remaining kittens off so they would be safer. There are three kittens. Lunar, the white one (affectionately known as the Fat Whitey because she was at least twice the size of her sisters), Lexie, the one with her head on the white one, and Leah (who started off as Liam until we realized he was a girl). Lexie and Leah were adopted together. Lunar was adopted by our good friend, and turned out to not be white, her points came in later.

Well, that's our flash back to fostering post... We are passing the 'Tagged' portion of the post to anyone who wants to play along...Happy Friday everyone!
Posted by SuziQCat at 7:46 AM
Labels: Flashback Friday, fostering