October started with a heat wave, or at least not cool fall weather like we would want.  We actually broke two records on the 3rd...daily temp record, and hottest day of the year!  We skirted with 100 during the summer but never broke it...we were all fine with that, but October said, Hold my Pumpkin Spice Latte! 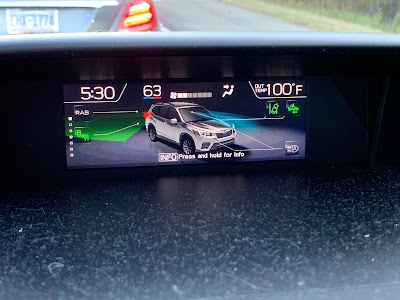 Ridiculous!  Thankfully, by Saturday we were in the 70's...a very nice change! 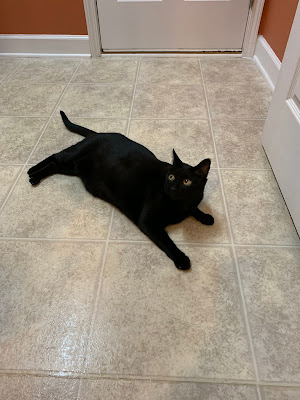 We opened the windows on Saturday and did some much needed cleaning...Oliver LOVES bleach and was super excited the floors were mopped!

Here is a quick video of him rolling on the floor... 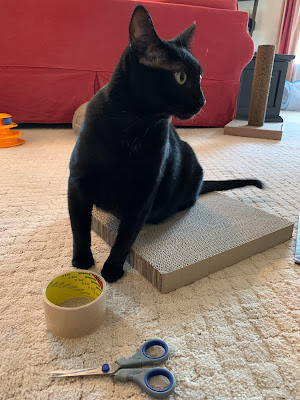 Later, we put together the two Halloween houses I found.  One was from the PetSmart and the other from Target, in case your family needs them :)  Oliver is a big helper.

I decided to do some reinforcing with extra tape to help the houses hold up to rough play and chewing! 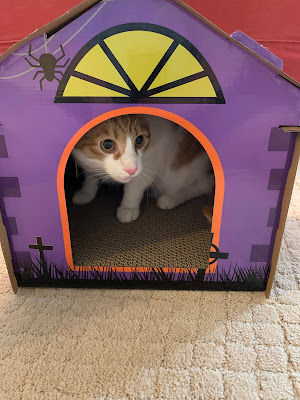 Rusty was the first one in the house from PetSmart...it only has one door...don't get trapped! 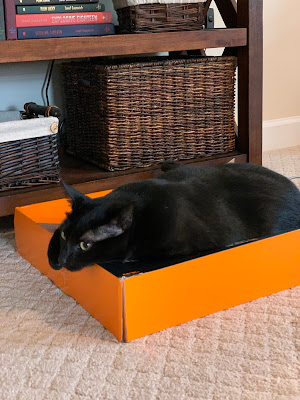 Oliver helping with the second house... 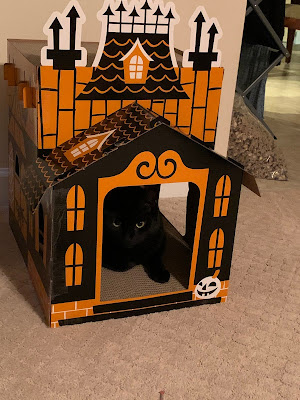 Harrison checking out the other one...This one has two doors and some windows.  There is a scratcher on the inside, and on top. 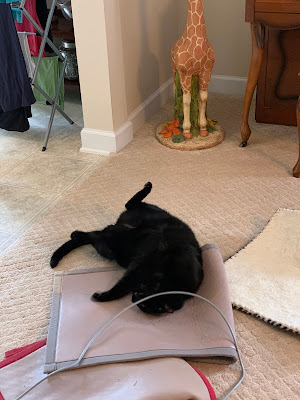 Flynn is a big goof and loved having the rugs in the den while the kitchen floor was being mopped.  He also is infatuated with the vacuum cord.  He was having the best time! 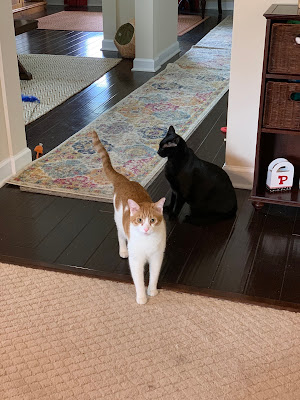 Rusty and Oliver checking things out and enjoying the windows being open.

We are not sure if the boys have realized Lenny is staying, or if the fresh air just made everyone extra frisky, but George, Flynn and Oliver were bullying Lenny on Saturday.  We broke out our Jackson Galaxy sprays and the feliway wipes to try and calm everyone down.  Over the weekend things settled down, but there are still moments when someone will look at Lenny too long, or chase him.  This morning we ordered Bully Remedy (we were out), Safe Space, and Changing Times to see if those will help everyone get back to normal and being nice. 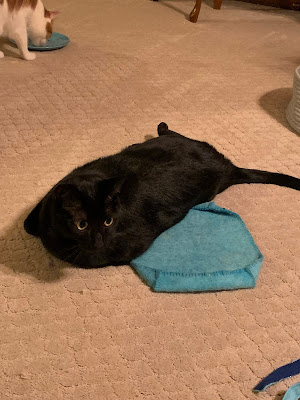 Oliver went to the vet on Thursday for a recheck and his chin is looking better.  The vet prescribed two more weeks of antibiotics and then another recheck.  We were also told to wash his chin daily with the chlorhexadine wipes I ordered.

I don't have a picture of Pirate, but he has started on B-12 injections.  His value was super low.  This week he GAINED two ounces!  We are hoping that is all he needs to perk up some and gain more weight.  Thanks for the continued purrs for him.