Tanner has been feeling puny again.  I came home on Thursday and his eye was so swollen.  The third eyelid was about half way over his eye, and lots of greenish discharge.  He also vomited a few times that evening.  I knew he would be going in the next morning. 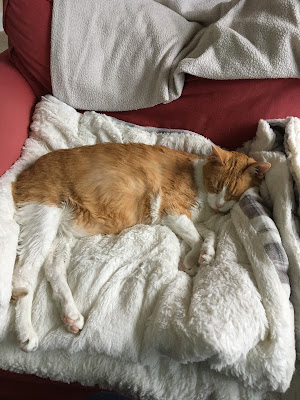 He didn't come and help us eat dinner on Thursday night, and didn't even want any popcorn, so something was up!

Friday I took him over to the vet as a walk-in.  He had eaten a small amount of breakfast, used the litter box, and put himself back to bed.  It was determined that he had pancreatitis and conjunctivitis.  We agreed to do supportive care at home over the weekend.

At the vet, he received fluids, a pepcid injection and a cerenia injection.  He was sent home with cerenia pills, eye drops, and a special gastrointestinal food.  (I have pepcid injections and sub q fluids at home already)

Happy to report that he is feeling better.  Eating more like his old self again and asking to play!  His eye looks better, but not completely healed yet.  I imagine we will be doing drops for another week or so.  Now, he also has a snuffy nose and sounds rather congested.

He goes tomorrow for a recheck, so we will see what the vet thinks.

Posted by SuziQCat at 8:34 AM
Labels: Pancreatitis, Tanner, VET