Tanner is a mystery case for sure.  His results came back simply showing that he had the feline herpes virus.  However, after 3 days off his antibiotics, he was sounding much worse again. 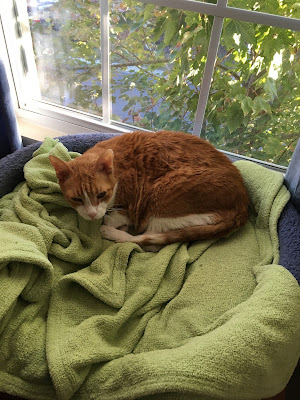 The initial thought was to simply keep going with the steroids for inflammation, and the lysine to possibly help suppress the herpes virus.  I had to advocate for Tanner and explain that the course of lysine and steroids had previously done nothing to help him, and the only thing that has helped has been his antibiotics.  I realize that they will not work on viruses, but wonder if he came back as not having bacteria present because he had just finished two weeks the day before the samples were taken?  I explained to the vet that the symptoms were returning already and asked if we could just try the antibiotics again to give his body a chance to fight.  He agreed and so we are doing three weeks this time. 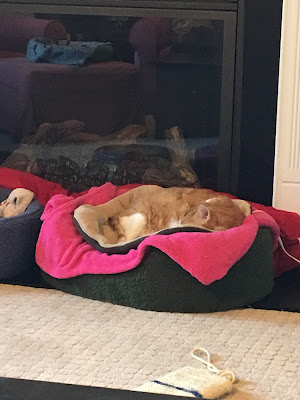 I asked if there was anything else we could be doing to try and improve his immune system to help him fight and so we are giving some probiotics as well.  We are also going to decrease the steroids in case they are suppressing his immune system more than we realize.
Tanner has gotten pretty stuffy again, so we are now doing the saline nose spray again as well.
I am refusing to give up hope that we will get him clear at some point!  Poor boy has been stuffy and sneezing for over two months now.  He is still eating well and asking to play.  We plugged in the heated bed this weekend and he has been happily cooking ever since!
We are thankful for your continued purrs!

Posted by SuziQCat at 9:38 AM
Labels: Cold or Allergies, mystery, Tanner, VET