Tanner continues to do well for the most part.  He went to the vet school last Thursday for his monthly recheck.  Of course, they shaved him a bit!  This time they did a full ultrasound, a couple of aspirates and he had a neurology consult.  Short answer - Still in remission! 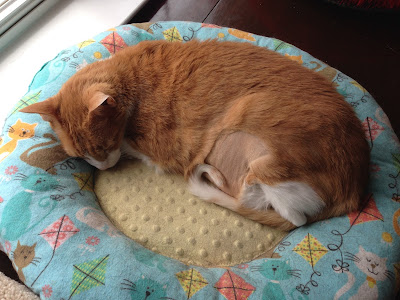 The ultrasound showed some changes to his pancreas and spleen.  They aspirated the spleen but did not find any evidence of lymphoma.  The pancreas is too sensitive to aspirate, so they presume it might be scar tissue from his bought of pancreatitis earlier this year.  His kidneys looked good still, and his blood values came back unchanged.  He is slightly anemic again, but that seems to come and go with him.  He does not have to return until the end of AUGUST!!!! 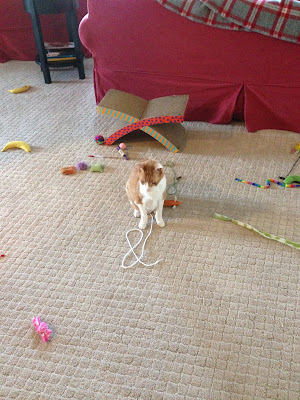 You may be wondering why we had the neurology consult..well June 14th, I came home from cat sitting to find all the bedroom doors closed.  I called to Auntie to see what was going on...she had had to separate the cats because Tanner snapped and was attacking anything and everything that he saw.  Oliver and Sophie were in one room.  Tanner was in the room with Auntie and Pirate and Georgie.  Tanner had a strange look in his eyes and was quite scary.  I finally grabbed him and put him alone in the bathroom to calm down.  After a while, I went to see how he was doing and took him some snack.  He was purring up a storm in the bathroom and ate like he was starved.  I wanted him to spend a bit more time chilling, so I went to leave.  He wanted to come out, so I tried to block him with my foot on the way out, but he came out anyway.  I called to Auntie that he was out, and she headed back up the stairs to help me.  We didn't want the whole thing to start over with his attacking everyone...since they were all spooked!  Tanner turned to me and was swatting at my legs...Auntie tossed a towel over him and back in the bathroom he went.

We left him in there about an hour, partly to give him time to settle, but also to give the other cats time to become less scared.

We went up to go to bed and wondered how we were going to manage during the night, but hoped everyone would be back to normal, now that some time had passed.  Well, Oliver is like an elephant and he did not forget that his momma had attacked him!  As soon as he saw Tanner, he flipped out...growling, hissing, puffing out his tail and generally scaring everyone in the house again.  Tanner saw this as a challenge and went after him...here we go again!

I should note that no cats or people were injured in these events...a lot of swatting and squealing mostly with some wrestling rolls thrown in.

Tanner spent the night in the kitten room, with a litter box, food and water, alone.  The night was peaceful.  The next morning, we let Tanner out and all was well for the most part.  Oliver still growled some when he saw Tanner and would not go in the kitchen with Tanner, but Tanner wasn't bothered by his actions.  When I got home from work that day, everyone had made up.

That night, Auntie did something loud and spooked Oliver and we started up again.  This time though, when you called Tanner's name, he would stop and walk away.  A much more normal response than what we had the night before.  Everyone stayed out during the night and we slept peacefully.

This is actually the second episode that Tanner has had in the past few months.  I mentioned it to a friend and she says that her dog does something similar and her vet has concluded that the dog is having a seizure.  Another friend says her cat does this about every two months, and is also taking Plavix like Tanner.

I mentioned all of this to the technician when Tanner went in, and they wanted Neurology to come over and do a quick workup on him.  They did not find anything abnormal on their consult, which is good.  They have recommended some testing (MRI, CT Scan, etc...) to rule out a tumor.  Lymphoma also has a history of spreading to the central nervous system, so these tests could check the spinal fluid for cancer cells.  However, at this time, we are just going to wait and see.  My theory is always "It will get worse or better".  If it gets worse or more frequent, then we may can try to figure it out. 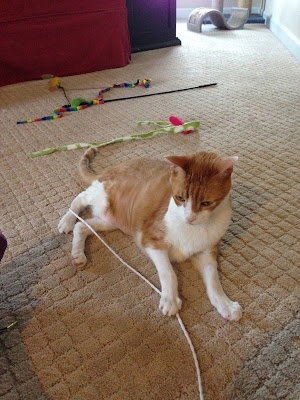 In the meantime, Tanner is enjoying playing with this new string.  His green "girlfriend" string is behind him.  We have cut our fluids and pepcid injections in half...so he only gets poked 7 times a week instead of 14!!

I also bought some "Safe Space for Cats" by Jackson Galaxy.  When we notice attitudes are shifting or emotions are running high, we give the downstairs a good spray.  It is hard sometimes with multiples to know when something is just behavioral or when it could be worse.

Well, that is a long update...I would love to hear your experience with fighting and how you have been able to address it.  Does anyone have knowledge of seizures in cats?

Posted by SuziQCat at 8:51 AM
Labels: Cancer, Kidneys, Tanner, VET