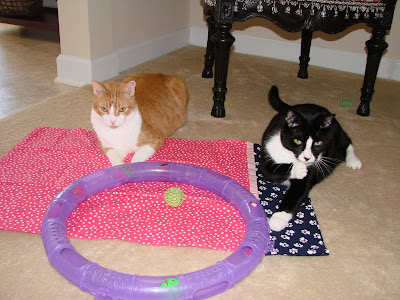 Tanner and Pirate are what I would call Frenemies. They seem to love to antagonize each other on a daily basis. They have a routine now...so I think they secretly enjoy tormenting the other one.

Example One:
Pirate gets brushed in the mornings by Auntie. Tanner and I play in the hallway, or in the kitten room. Tanner blocks the door, so Pirate can't get out of Aunties Room. Pirate then lays on the stairs, so Tanner can't get by. Tanner runs by anyway, and Pirate chases. Both boys get called down. Every morning!

Example Two:
Pirate goes into the litter box. Tanner comes over and blocks the door. Pirate runs by, Tanner chases, both boys get called down.

I think they secretly like one another, but they are picking on each other all the time it seems.

Do you have frenemies at your house? How do you handle it?


Posted by SuziQCat at 11:00 AM
Labels: Cousin Pirate, Frenemies, Tanner