We arrived in Sapporo on December 22nd and were immediately hit with a snow storm.  It wasn't a big one for the people of Sapporo, but for those of us from North Carolina, it was a big deal!  We had fun and were thankful the city didn't shut down like our town would have! 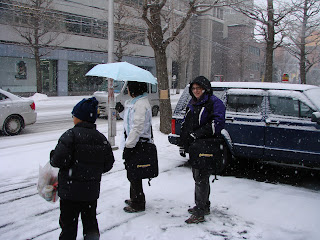 We have now met up with another lady and her son as well...here are my two original travel mates, and the son of our other friend enjoying the snow.  We walked over to the convenience store to grab some snacks after lunch. 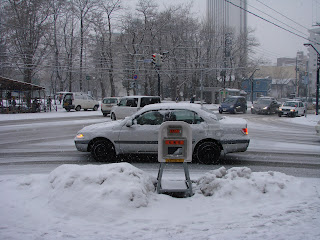 A common site at intersections was these containers with packets of a salt mixture.  If you felt the sidewalk was slick, you could use some to help keep it safe for everyone.  What a neat idea! 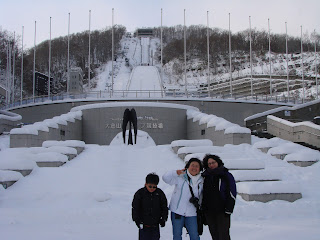 The next day, we went to the site of the Winter Olympics in 1972...the ski jump!  It was very cool to see, and I was shocked at how tall the jump was!  I don't know why one day you'd wake up and decide to jump! 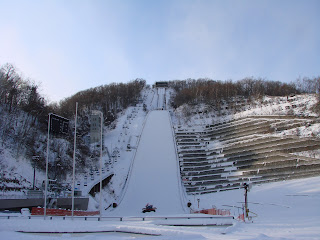 Another view...there is a chair lift going up the left hand side...the wind was blowing pretty strong, so it was not working... 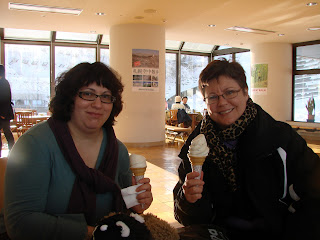 We waited in the museum/cafe/gift shop for a while to see if the wind would die down enough for it to run, but it did not.  We enjoyed yummy soft cream though.  Hokkaido is known for dairy, and their soft cream is delicious! 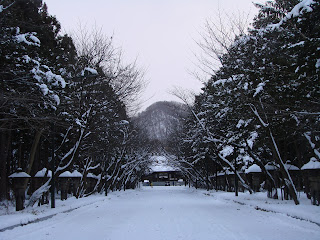 We took the bus back down the mountain and found a shrine.  This is a Shinto shrine, and the others we've seen thus far have been Buddhist.  I am not sure the true differences, and other than not seeing a statue of a Buddha, I could not tell a difference. 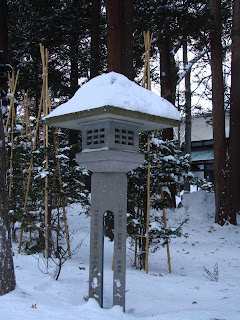 Of course they have the cute lanterns that I love so much...it was neat to see them in the snow.  You may need to biggify, but the trees in the background are braced up...many in the town were like this, so we figured it was to protect against the weight of the snow over the winter.  Some of you in the northern climates may see similar things in your area, but this was new to us. 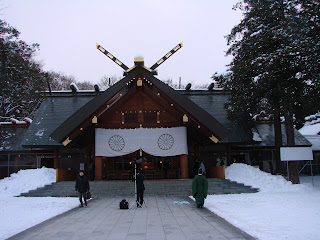 The actual shrine...there was a wedding party about to come out, hence the photographer. 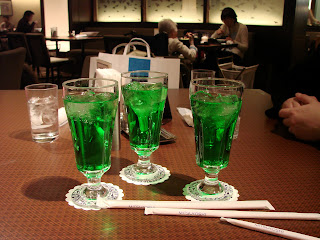 Lunch the next day, and we tried the melon soda...it is quite green and quite delicious! 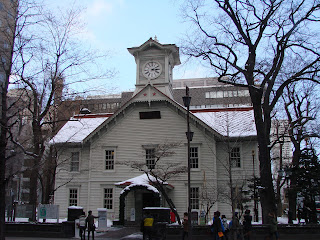 Venturing around Sapporo more...the clocktower is a recommended site...it was smaller than I was expecting. 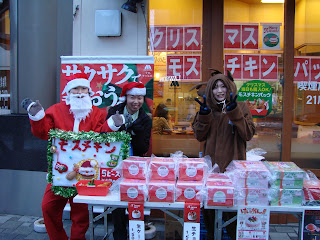 For Christmas, the tradition is to eat KFC, sushi, and strawberry shortcake...here are some Christmas cakes for sale... 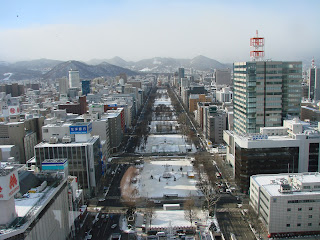 The last day in Sapporo, Christmas Day, we went to Odori park, and went up in the tv tower.  This picture shows the park from the tower.  At night it is all lit up with pretty lights!  Right now, due to the earthquake and tsunami, the country is conserving energy where they can, so the illumination area is only about half the size and density from previous years, according to the taxi driver.  This is talso the area where the snow festival will take place in February.

We flew back to Tokyo this day, so that's where we'll be tomorrow...
Posted by SuziQCat at 6:30 AM
Labels: Japan Vacation