The boys have enjoyed their week.  There were a couple of cool mornings so we could open the windows! 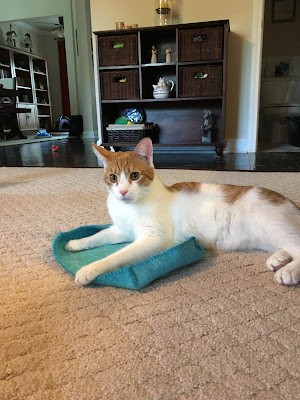 Rusty felt puny yesterday for most of the day.  He had a coughing fit in the night and then didn't want his breakfast.  By the evening though, he was back to eating and asking to play, although he had another coughing fit.  Will keep an eye on him. 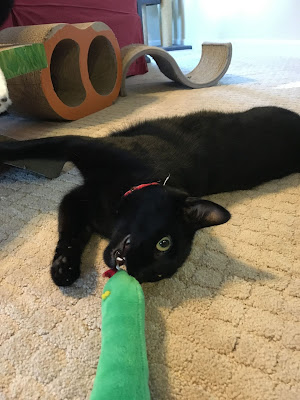 Harrison is a silly boy and enjoys playing.  He still asks for several extra cans of food a day...what a goober! 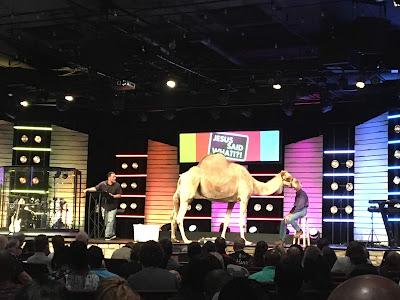 Our guest visitor today is Niles the Camel.  He attended our church service as an illustration for Matthew 19:24.  Things started out well.  We've had animals on stage before...just nothing so large!  He was well behaved during the service, just standing there with his behind to the crowd.  However, when it was time for him to leave, he decided he wasn't done!  He backed up instead of moving forward, and ended up stepping off the stage!  The stage is probably 4 feet off the ground.  Thankfully, he didn't get hurt or fall down!  But now, he is in the sanctuary with the people... 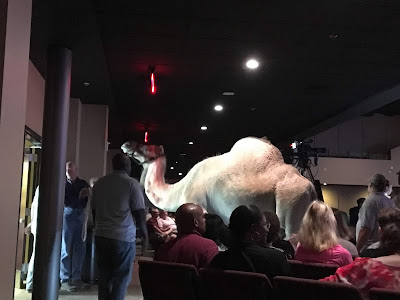 They tried to get him to head out the doors, but he wasn't going.  He just walked around and did what he wanted.  We had to dismiss without anymore singing :)

From what I hear, it took about 45 minutes to convince him to leave...he stayed outside for the second service!  LOL

Well, there you have it...never a dull moment around here!

Posted by SuziQCat at 9:05 AM
Labels: Camel, Harrison, Rusty