Usually Tanner posts on Tuesday, but today is a celebration...Tanner has been in remission for TWO YEARS!!

Who knew when we started his cancer journey in July of 2014 that he would still be thriving today?  I am so thankful for every day with my orange boy!

Here are a few photos showing what he has been up to lately.  His knees and hips have been bothering him, so I have increased his arthritis/pain meds.  He will go for a recheck next week. 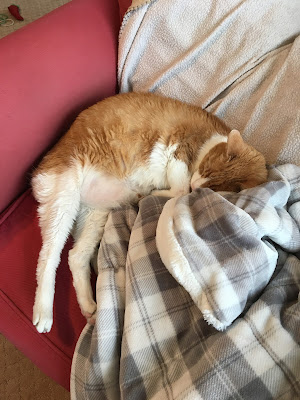 Tanner has discovered Aunties chair...they have to fight in the evenings to see who gets to sit in it!  MOL 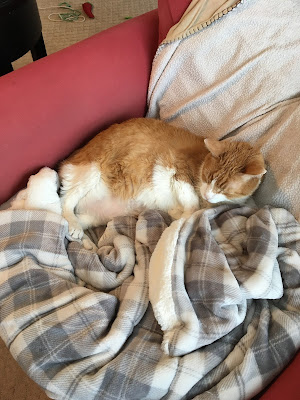 Tanner usually wins :)  He especially loves this new throw.  It is by a company called Cuddldud and it is super soft! 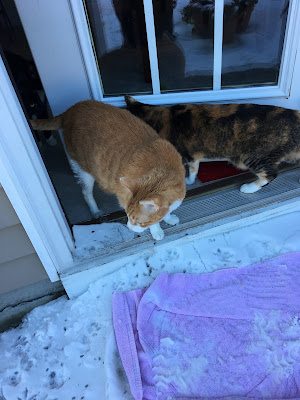 Tanner was not too impressed with our snow/ice the other weekend...there will be a post about it later. 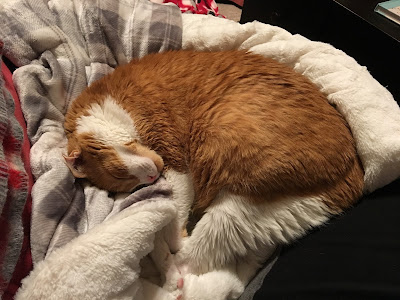 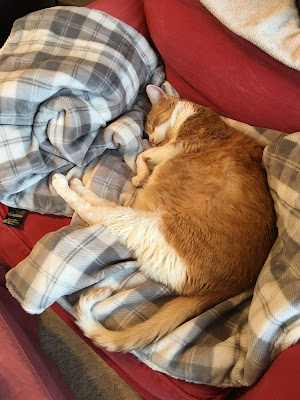 You may have noticed he isn't bending his back legs in most of these photos...his knees are very stiff.  He has finally taken to climbing the stairs again since the medication increase.

He is also going back on the calorie control canned food to try and get some weight off again.  I admit I have let him have what he wants since his diagnosis, but now, the weight is affecting him in other ways.  At least he loves his calorie control food!  MOL

Well, that's our big news today!  Thank you all for your continued support and prayers.  Tanner is living proof of the power of the paw!
Posted by SuziQCat at 6:30 AM
Labels: Arthritis, Cancer, Remission, Tanner, VET