Petfinder.com has designated the week of September 17-25 as “Adopt a Less Adoptable Pet Week,”  a week to spotlight those pets that’re most often overlooked in shelters. When we fostered we were given many black kittens, and typically they took longer to adopt out that other colors did.  This is an unfortunate delima for these sweet babies, as anyone who has adopted a black cat will attest that they are the best! 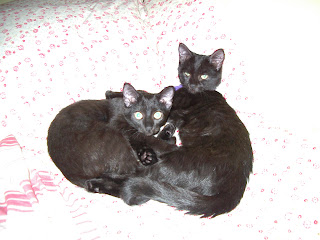 To be quite honest, I'm not sure who these kittens are anymore...but look at those sweet faces! 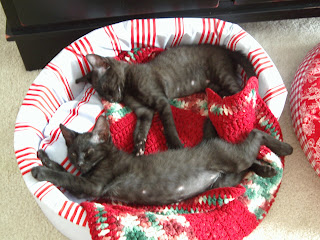 This is Cole and Caleb...brothers.  They were adopted separately and into loving homes.  They were super sweet bottle raised kittens that we had.  One thing I remember about these boys, is that they liked their bottles really warm...if it was the least bit chilled, or room temperature even, they would not drink it! 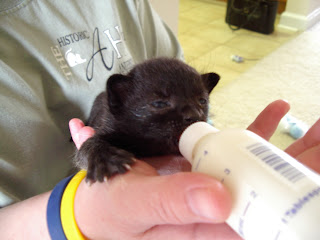 This is Velcro...he is another bottle raised boy we had...and just as sweet as he could be.  He had an identical brother named, Xavier, and they were well bonded, and needed to be adopted together.  This created more problems because now we needed someone to take TWO black cats!  It took these boys almost a year to find their forever home...they were lucky to be a group where time wasn't a factor.  Not all black cats have this luxury. 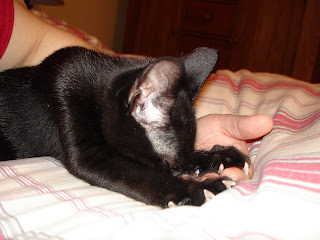 Here's another shot of Velcro...he would nurse on your fingers!

I have found a group in Boston Massachusets that understands the plight of the black cat, and have founded Black Cat Rescue.  It is important to get the word out about these remarkable animals, so consider going black the next time you adopt.  Here are some more reasons why...

10.You'll save $$ on their Halloween costumes.
9. You can always find them in the snow.
8. Holding a black cat is very slimming.
7. Black cats will match any decor.
6. A lint brush isn't required for a black-tie affair.
5. When you love a black cat, luck is on your side.
4. Black cats are like onyx, a beautiful gem.
3. Hey, they don't care what color you are!
2. Love knows no color.

And the number one reason to adopt a black cat...

1. They are the least likely to be adopted.